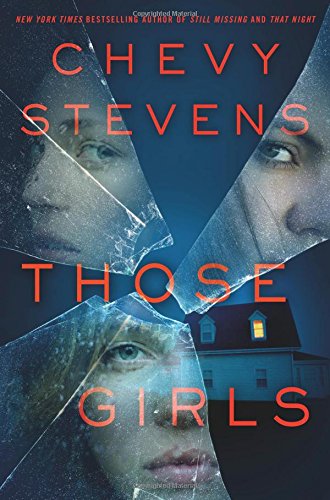 Many thanks to St. Martin’s Press for providing me with an ARC of this book in exchange for an honest review.

Those Girls is the story of the three Campbell sisters who have impossibly (if not implausibly) bad luck.

Courtney, Dani and Jess endure a difficult life with their father after their mother has died. Though their father is often absent, he is a violent, abusive alcoholic when he’s around. He goes into an alcoholic rage and forces the girls into a situation which ultimately leads to their need to flee the rural town of Littlefield in order to stay together and out of the foster care system.

Changing their names to Crystal, Dallas, and Jamie, the girls head off to Vancouver in Dani’s pickup truck. They don’t get very far before the truck breaks down. Two young men, brothers Brian and Gavin stop to help them. The girls fail to listen to their gut instincts and are convinced to take off with the brothers. They are promised they will be given lodging at their father’s ranch. There they will provide labor in exchange for truck repairs.  It doesn’t take long for Brian and Gavin to make their true intentions known. The girls are raped, beaten, and imprisoned. (There are several scenes with somewhat graphic descriptions of rape and violence.) When they eventually escape, they manage to find help creating new identities.

Fast-forward eighteen years where we find the sisters still close and having done their best to move on. Enter Skylar who is Jamie’s teenage daughter. She is very, very close to her Aunt Crystal. Sadly, Crystal has some emotional and substance abuse problems which lead them all back to into harm’s way.

Those Girls is a fast read. Though I found myself questioning the likelihood of this particular series of events actually taking place in a real person’s life, I have to admit that I found it difficult to put down. I liked the characters we are meant to like and despised the ones we are meant to despise. Most importantly, I would like to thank the author for giving us an unpredictable ending!