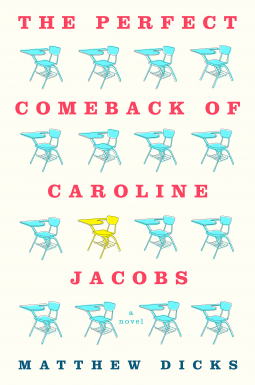 Thanks to St. Martin’s Press via Netgalley for providing me with a free digital copy of this book in exchange for an honest review.

Caroline Jacobs is a responsible wife and mother. She avoids conflict and suffers in silence. Until the day that she doesn’t. When the snarky, self-rightous PTO President makes a hurtful remark to a struggling mom at a PTO meeting, Caroline loses it (just a little) and tells her “F you” setting off a series of events that change everything. It begins when she is called in to the school office to learn that her daughter has been in a physical altercation with the daughter of the PTO President. Knowing her daughter will likely be facing suspension, she tells her daughter to get in the car and they start heading out of town leaving the dad/husband behind. At first daughter Polly is quite confused but Caroline explains that they are heading to Caroline’s mother’s house where she plans to confront her former best friend (she still lives in the same small town) who turned against her in high school shortly after Caroline’s family had major changes to their socioeconomic status. Along the way she shares the details of the hurt she still bears with her daughter who begins to see her mother in a new light. When she reunites with her old friend, things don’t turn out exactly as Caroline had planned but they do turn out exactly as they were meant to.

This was a very quick read but lacked a little something in terms of complexity. While I wouldn’t have wanted to see this book turned into something too heavy, I do think some of Caroline and Polly’s feelings could have been explored on a slightly deeper level. I wish I had felt that Caroline had become as strong as her daughter Polly already was but perhaps that wasn’t the author’s intention. I really liked many of the characters including the grandmother, her client, and her boyfriend. This is the first book I’ve read by Matthew Dicks and I would look forward to reading books by this author in the future.