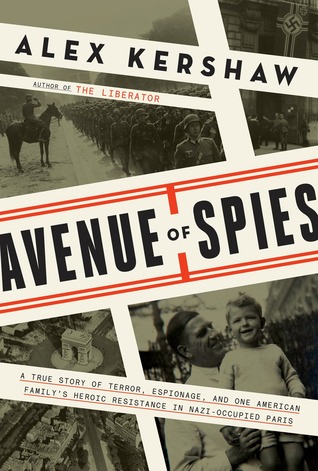 Thanks to Crown Publishing via NetGalley for providing me with a free copy of this book in exchange for an honest review.

Avenue of Spies is the story of the Jackson family during the Nazi occupation of Paris. Sumner Jackson is a well-respected physician working at the American Hospital. He and his wife, Toquette and son, Philip reside on the Avenue de Foch, one of the most prestigious avenues in Paris. They are forced to watch as many of their neighbor’s homes are overtaken by the the highest-ranking and most ruthless leaders of the  Nazi regime. Dr. Jackson uses his position at the hospital to help where he can. His contribution to the French resistance involves helping fallen Allied pilots to safety in Spain. For her part, his wife agrees to help by coordinating  a central location for resistance members to exchange information within their home – directly under the noses of their Nazi neighbors . Sadly, it all comes to an abrupt halt when they are finally discovered.

Though not an easy read, this was a very interesting story. It differed from some of the other books regarding the occupation of Paris that I’ve read in that it focused primarily on one family, their heroic efforts, and willingness to risk everything. There were several interesting historical facts that I either didn’t know or had forgotten – including the unwillingness of some of Hitler’s officers  to follow his order to reduce Paris to rubble when defeat was imminent. Though there were obviously some parts of the book that were difficult to read, I found that it read more like a novel and was hard to put down. I would definitely recommend this book to anyone wanting to learn more about that period in French history.