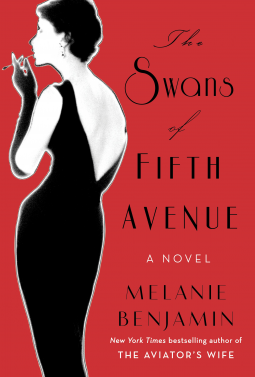 Thanks to Random House Publishing Group Ballantine via NetGalley for providing me with a free copy of this book in exchange for an honest review.

In The Swans of Fifth Avenue, Melanie Benjamin gives us a delicious glimpse into the lives of the “original ” Housewives of NYC.  In the 1950’s, these ladies – Babe Paley, Slim Keith, Gloria Guinness, CZ Guest, Pamela Churchill – and the company they kept worked very hard to maintain the illusion that is consistent perfection. They were the beautiful, glamorous swans of Truman Capote.

Babe Paley was in a class by herself. Tall, elegant, a fashion icon, held in the highest social regard of her peers… But all of that, her many homes, and boatloads of money could not keep her husband’s attention or quell her insecurities. Perhaps that was one of the things that bonded her so tightly to Truman. He was, himself, a fabulous public persona with his own set of deeply rooted issues and insecurities. They seemed to love and understand one another on a wonderfully deep level and were each other’s constant confidant.

For years the group carried on with a terrific friendship and jet-setting lifestyle. Truman was on top of the world after the publication of In cold Blood and threw a magnificent party that remains one of the most famous in history. (There is an entire non-fiction book devoted to the party. https://www.goodreads.com/book/show/60481.Party_of_the_Century)

After he reached is professional pinnacle with the publication and accolades of In Cold Blood, however, Truman’s life devolved into a bit of a drinking, drugging mess. He was having difficulty writing and, sadly, betrayed his swans by publishing very intimate details of their lives in magazine articles that barely attempted to conceal their identity. And so that was end of the friendships. The end of an era, really. Truman became a social outcast.

I really loved that so much of this book is based in historical fact including the story of Ann Woodward. I was inspired to read more about all of them. The book is told in such a way that I felt sorry for almost everyone – including Truman. The author did such a fantastic job of conveying so many facets to and nuances of the character’s personalities it was impossible not to relate to each in some way.