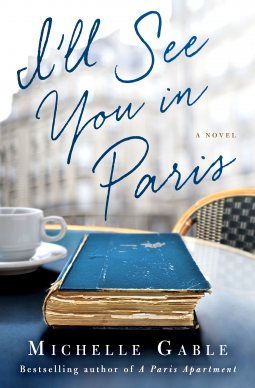 Thanks to St. Martin’s Press via NetGalley for providing me with a free ARC of this book in exchange for an honest review.

Beginning at a their horse farm in Virginia, then alternating between 1970’s and 1990’s Paris and England, I’ll See You in Paris is the story of a mother and daughter reconciling the past with their present. Though it is narrated in alternating time periods, and there are many twists and turns in the plot, the author makes the transitions smooth and easy to follow.

Annie Haley is a young woman who is not going to let anything stop her from finding out the truth about the missing Duchess of Marlborough – or herself. Her mother Laurel has been hiding many things, including her paternity, from her. While in Banbury, England to settle an estate her mother recently revealed she had inherited, Annie sets out to link the missing pieces together. She finds help in Gus, a regular at the local pub. They strike up an unlikely friendship and that’s when things become very, very interesting.

The story is told with a nice balance of seriousness and humor. The characters are well-drawn and all likable in their own way. That goes for the fictional characters as well as the Duchess herself. Though I admittedly didn’t know was a ‘real’ person until the end of the book.But it makes perfect sense. Some of this stuff you really couldn’t make up…

Michelle Gable does an equally great job describing the setting and locations. Reading this book certainly made me want to get on the next flight to London so I could make my way to Banbury, bike to the George and Dragon, and have a pint with Gus! Followed by a trip to Paris, of course.