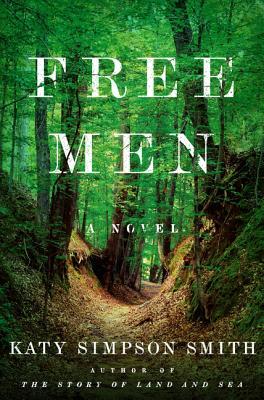 Though Free Men is the story of a slave, an orphan, and Creek Indian, it is not so much a story about being a slave, orphan, or Indian. At its essence, it’s really a very poignant story of relationships, injustice, loyalty, and how we perceive ourselves.

It’s 1788 and the unlikely trio of Bob (escaped slave), Cat (a misunderstood, fragile, and traumatized white man), and Istillicha (a Creek Indian who has been wronged by his tribe and his love interest) form a bond after their lives intersect by sheer coincidence. When what was supposed to be a robbery turns into the brutal murder of several men, the French tracker Le Clerc is dispatched to find them and bring them to justice.  As they travel along together with no clear plan, we learn so much about them and their previous lives that we gain a solid understanding of who they are and how they came to be that way.

The characters were very well-developed and  described in a way that had me thinking I knew and understood them well. As with any good story, however, there are some things one just doesn’t see coming.

Katy Simpson Smith gives us a beautifully written story to reminds us that friendships and loyalty are not always based on the things we have come to expect, sometimes the most permanent love is based on mutual respect and friendship rather than wild romantic notions, and justice is frequently imperfect.

Thanks to HarperCollins Publishers via Edelweiss for providing me with a free copy of this book in exchange for an honest review.