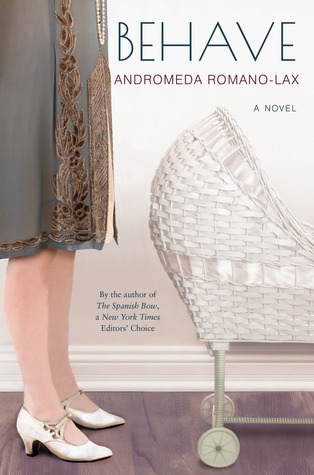 Behave by Andromeda Romano-Lax is the story of Rosalie Rayner Watson and her marriage to psychologist John B. Watson, who came to be known as the Father of Behaviorism.

This happens to be another of those books that’s tough for me to review as there is a great disparity in what I feel about the author’s abilities as a writer and story teller and my overall impression of the book. I think the author did a fabulous job in articulating  Rosalie’s story despite the fact that aren’t a lot of historical documents, etc. available to fully shape Rosalie’s character. It was an easy, fast read and I enjoyed the author’s writing style. However, I found both Rosalie and John to be unlikeable; their story mundane.

Rosalie is a young Vassar grad when she meets John. She lands a job as his research assistant at Johns Hopkins where they perform somewhat cruel experiments, on infants to prove John’s incomprehensible theories on behavior, conditioning, and child-rearing. John is married but, as expected, they begin an a affair (not his first by any means) which ultimately results in John and his first wife divorcing. Also not surprising, Rosalie, through the years, becomes disillusioned. Why would she think he’d be faithful to her? Should she be surprised that he would be less than discreet with his paramours? What mother would want to have to hide her affection toward her children? Simply put, John is a bit of ass. But then again, perhaps she shouldn’t have been so naive. But it’s more than just naivete that I found objectionable about Rosalie. She was rather a cold-hearted and unfeeling in her approach to her test subjects and I was glad that I wasn’t forced to read too many detailed accounts of the morally reprehensible experiments she helped perform on babies. The few I did have to read about were quite enough, thank you very much.

As for John Watson’s contribution to the world, all I can say is I can’t even imagine anyone believing in this man and his theories and I’m glad we’re no longer referring to his parenting guides.

Though I didn’t love this book, I would give any future books by Ms. Romano-Lax another chance depending on the subject.

Thanks to Soho Press via NetGalley for providing me with a free ARC of this book in exchange for an honest review.