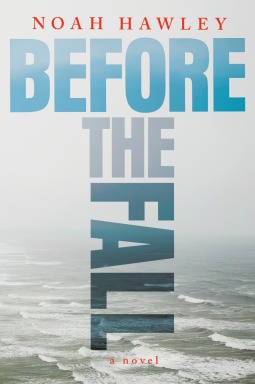 Though I probably shouldn’t have started reading Before the Fall during a super-turbulent flight, I will say that it’s certainly a page-turner.

We know how the story ends (begins). The plane crashes. Nine people are dead. There are two survivors; Scott Burroughs, an artist who was offered a free ride to the city from a woman he’s met on the Vineyard, and her four year old son. Beyond that, we are left with nothing but questions. Many, many questions… What is Scott’s relationship with Maggie, the plane’s owner, and why is he really on the plane? Is Scott really the hero he seems to be? Or is there an explanation for his being one of only two survivors? Was it mechanical failure? Or was the pending indictment of one of the passengers (he was a finance guy, of course) a factor? Was there a lover’s quarrel in the cockpit? Did the bodyguard go rogue?

It must be difficult to develop characters for a book when said characters are almost all dead beyond the first few pages but I think Noah Hawley does a fair job here. There are some interesting dynamics in the bond that has formed between Scott and JJ, the little boy he rescued, and Eleanor, the boy’s aunt and legal guardian. These relationships help to give the book more depth and interest than is sometimes found in a more typical whodunnit.

I loved the way this book kept me guessing until the very end. The crashed could have been caused by any number of things and I vacillated back and forth unendingly in my own theories. I do admit to being a little disappointed, however, when the truth was revealed. I felt that there was a lack of creativity in the way it all wrapped up which surprised me as it was in sharp contrast with the rest of the book. Overall, though, I would say it’s a great read and I would definitely read this author’s next book.

Thanks to Grand Central Publishing, via NetGalley for providing me with a free copy of this book in exchange for an honest review.