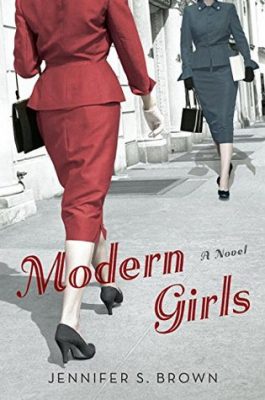 A dazzling debut novel set in New York City’s Jewish immigrant community in 1935... How was it that out of all the girls in the office, I was the one to find myself in this situation? This didn’t happen to nice Jewish girls.   In 1935, Dottie Krasinsky is the epitome of the modern girl. A bookkeeper in Midtown Manhattan, Dottie steals kisses from her steady beau, meets her girlfriends for drinks, and eyes the latest fashions. Yet at heart, she is a dutiful daughter, living with her Yiddish-speaking parents on the Lower East Side. So when, after a single careless night, she finds herself in a family way by a charismatic but unsuitable man, she is desperate: unwed, unsure, and running out of options.   After the birth of five children—and twenty years as a housewife—Dottie’s immigrant mother, Rose, is itching to return to the social activism she embraced as a young woman. With strikes and breadlines at home and National Socialism rising in Europe, there is much more important work to do than cooking and cleaning. So when she realizes that she, too, is pregnant, she struggles to reconcile her longings with her faith.   As mother and daughter wrestle with unthinkable choices, they are forced to confront their beliefs, the changing world, and the fact that their lives will never again be the same….

Rarely, upon finishing a book, am I at such a loss for words. What I want to know is: Where is the rest of the book?  Modern Girls had the potential to be so much more…

Rose and Dottie, a Jewish mother and daughter living in 1930’s Manhattan, become pregnant at the same time. Neither is exactly thrilled to learn that they are in the family way. Rose is in her early 40’s and will soon regain some freedom as her youngest son begins his education. Dottie is unwed and running out of options.

There were some very interesting twists and turns of events. And a nice illustration of a pretty ideal mother-daughter relationship; not without some strife, of course, but with maximum love and loyalty. The relationship Dottie has with her brothers is also very touching. As I was nearing the end of the book, however, I became concerned that nothing seemed to be coming to any sort of conclusion. I thought perhaps there was going to be some sudden, drastic event that would wrap up all of the loose ends. Not so. If the end was intended to be a set-up for a sequel, it is still far too lacking. It needed a prologue at the very least. If I’d had to rate the book half way through, I would have given it 3.5/stars. Unfortunately, the ending was too disappointing to overlook.

I received a free copy of this book from Berkley Publishing Group, via NetGalley in exchange for an honest review.

Like Loading...
Previous Post: « Review of “The A to Z of You and Me” by James Hannah
Next Post: Review of “Free Days with George: Learning Life’s Little Lessons from One Very Big Dog” by Colin Campbell »