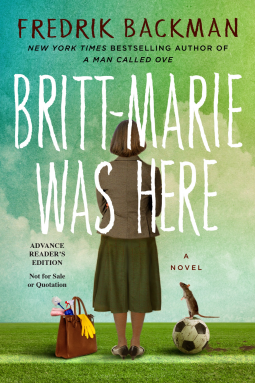 From the bestselling author of A Man Called Ove and My Grandmother Asked Me to Tell You She’s Sorry, a heartwarming and hilarious story of a reluctant outsider who transforms a tiny village and a woman who finds love and second chances in the unlikeliest of places.
Britt-Marie can’t stand mess. She eats dinner at precisely the right time and starts her day at six in the morning because only lunatics wake up later than that. And she is not passive-aggressive. Not in the least. It's just that sometimes people interpret her helpful suggestions as criticisms, which is certainly not her intention.
But at sixty-three, Britt-Marie has had enough. She finally walks out on her loveless forty-year marriage and finds a job in the only place she can: Borg, a small, derelict town devastated by the financial crisis. For the fastidious Britt-Marie, this new world of noisy children, muddy floors, and a roommate who is a rat (literally), is a hard adjustment.
As for the citizens of Borg, with everything that they know crumbling around them, the only thing that they have left to hold onto is something Britt-Marie absolutely loathes: their love of soccer. When the village’s youth team becomes desperate for a coach, they set their sights on her. She’s the least likely candidate, but their need is obvious and there is no one else to do it.
Thus begins a beautiful and unlikely partnership. In her new role as reluctant mentor to these lost young boys and girls, Britt-Marie soon finds herself becoming increasingly vital to the community. And even more surprisingly, she is the object of romantic desire for a friendly and handsome local policeman named Sven. In this world of oddballs and misfits, can Britt-Marie finally find a place where she belongs?
Zany and full-of-heart, Britt-Marie Was Here is a novel about love and second chances, and about the unexpected friendships we make that teach us who we really are and the things we are capable of doing.

Sixty-three year old Britt-Marie has finally left her philandering husband and is trying to move on with her life. But there are more than a few obstacles in her way. To begin with, it’s more than a little difficult for a woman her age, who has not been gainfully employed in forty-some years to find a job in the middle of a financial crisis. But Britt-Marie is very resourceful. And by this, I mean that she pesters the poor young woman at the unemployment office, wearing her down until she finds her a position in the somewhat disadvantaged town of Borg. Thus begins Britt-Marie’s journey toward independence, friendships, and self-actualization(!). No small accomplishments for this very quirky, somewhat neurotic, maker-of-lists, and keeper of order who loathes soccer, has never had children of her own, and has somehow become the children’s soccer coach in Borg.

This is one of those books that is not terribly long, and is written very simply, but packs a huge punch in terms of conveying an astounding amount of emotional ranges and the understanding of human relationships.(And, at times, those with dogs and rats.) From desperation and sadness to hopefulness and redemption, it’s impossible not to laugh and cry, at times simultaneously. It is a beautiful thing, how Britt-Marie became such a vital part of the community. And even more so how the community became such a vital part of her.

Every character is so carefully revealed and so richly developed it would be quite easy to convince me I actually knew them. There are too many to mention but individually but I will say that I wouldn’t mind having a beer with Bank and Somebody. But as much as each character stands out individually, it’s the collective character of the town that is most unique and endearing.They are mostly good people, doing the best they can. And while they may not agree on every little thing, when the you-know-what hits the fan, they stand together. Many of us have lived in Borg, if not geographically, then metaphorically, at one time or another. And if not, then we should wish that we had.

Many thanks to Atria Books via NetGalley for providing me with a free copy of this book in exchange for an honest review.