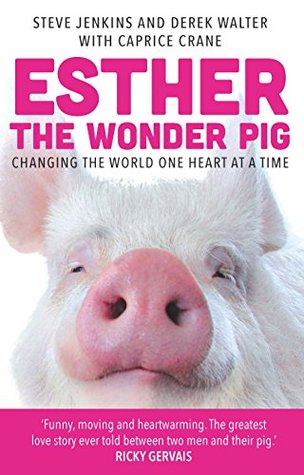 “Every amazing and wonderful thing that happened to us was because of an animal that most people don’t think of as more than a barcode in a grocery store.”

It’s hard to not to go all fangirl when I think about Esther the Wonder Pig. I’ve been a Facebook fan of Esther’s for a long time now. Her substantial physiognomy and wry sense sense of humor (not to mention her wardrobe!) have never failed to put a smile on my face. Needless to say, I was very excited when I heard there was to be a book written about Esther, her dads, and their journey. I even had an idea of how the book would go:

Esther’s story is so much more than I ever realized. First, there are the small details of how Esther came to live with Steve and Derek. . But I don’t like spoilers so I’ll leave it at that.

Then there’s all the things they went through as they learned to adapt to life (with what would turn out to be a 650lb) commercial pig. And it’s a lot. As it turns out, raising and training Esther was no easy job. And not exactly glamourous. But there is a one-word explanation for why it ultimately worked: COMMITMENT.  Sure they loved her, but that was the easy part. Who wouldn’t? Steve and Derek stuck it out when the going got really, really tough.

Then, on a whim, Steve decided to give Esther her own Facebook page. And that’s when life became even more exciting. Esther became an overnight celebrity. Steve and Derek gave Esther a voice and she began to use it to communicate with kindness and humor. As it became painfully obvious their family had outgrown their modest home, Esther used her voice to help her dads raise some of the necessary funds to relocate to the farm which is now the Happily Ever Esther Farm Sanctuary.

Esther the Wonder Pig is a fantastic, fun, quick read that will make you laugh and cry. I loved the honesty and humor!

Thanks to Grand Central Publishing via NetGalley for providing me with a free copy of this book in exchange for an honest review.

Like Loading...
Previous Post: « Review of “We Could Be Beautiful” by Swan Huntley
Next Post: Review of Framed: Why Michael Skakel Spent Over a Decade in Prison For a Murder He Didn’t Commit by Robert F. Kennedy Jr. »