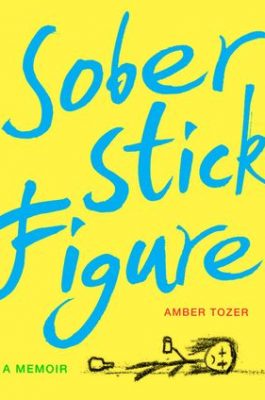 Sober Stick Figure is a memoir from stand-up comedian Amber Tozer, chronicling her life as an alcoholic and her eventual recovery— starting with her first drink at the age of seven—all told with the help of childlike stick figures. Amber writes and illustrates the crazy and harsh truths of being raised by alcoholics, becoming one herself, stagnating in denial for years, and finally getting sober.As a teenager, Amber is an overachieving student athlete who copes with her family’s alcoholic tragedies by focusing on her achievements. It quickly takes a funny and dark turn when she starts to experiment with booze and ignores the warning signs of alcoholism. Through blackouts, cringe-worthy embarrassments, and pounding hangovers, she convinces herself that she “just likes to party.” She leaves her hometown of Pueblo, Colorado to follow her dreams, and ends up in New York City, spending lots of time binge drinking, passing out on trains, and telling jokes on stage. She then moves to Los Angeles, thinking sunshine and show business will save her. Eventually hitting rock bottom, she has a moment of clarity, and knows she has to stop drinking. It’s now been seven years since that last drink, and she’s ready to tell her story. Sober Stick Figure is adventurous, hilarious, sad, sweet, tragic—and ultimately inspiring.

Amber Tozer is super-funny, brutally honest comedian who has bravely chosen to share her story of alcoholism and recovery with the world. If you’re thinking this is another super-heavy memoir that will leave you feeling  nothing but depression and pity, just take a look at the cover. That sick figure version of Amber makes frequent appearances throughout the book… 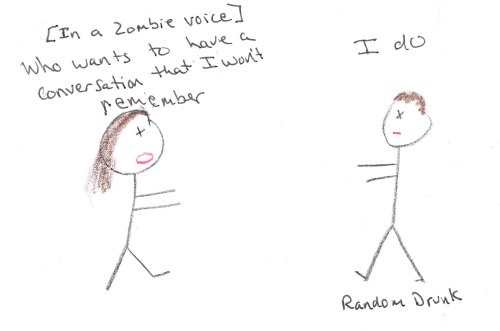 In a very real and funny way, Amber Tozer shares how and why she first began drinking, how her drinking became out of control, her struggles to gain control, and finally, how she was able to get sober. And there are also several funny stories about urine. And a few other funny (funny haha and funny odd) stories that have little or nothing at all to do with urine.

It’s refreshing to hear another human being share their insecurities and worst moments with such candor and humor.There’s no blame game being played here (though the author did have some difficult moments in her childhood). And though I got the sense that she definitely had some regrets about some of the things that occurred while she was drinking, this isn’t a preachy book about redemption or regret and self-loathing.  I got the sense that she was sharing her story to make people smile and to help others who may be having a difficult time.

Sober Stick Figure was a quick, page-turning, one-day read for me.

Thanks to Running Press via NetGalley for providing me with a free copy of this book in exchange for an honest review.

Like Loading...
Previous Post: « Review of Framed: Why Michael Skakel Spent Over a Decade in Prison For a Murder He Didn’t Commit by Robert F. Kennedy Jr.
Next Post: Review of “Stranger, Father, Beloved” by Taylor Larsen »