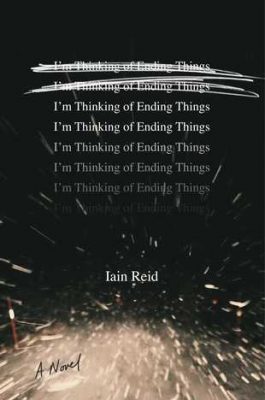 You will be scared. But you won’t know why…
I’m thinking of ending things. Once this thought arrives, it stays. It sticks. It lingers. It’s always there. Always.
Jake once said, “Sometimes a thought is closer to truth, to reality, than an action. You can say anything, you can do anything, but you can’t fake a thought.”
And here’s what I’m thinking: I don’t want to be here.


In this deeply suspenseful and irresistibly unnerving debut novel, a man and his girlfriend are on their way to a secluded farm. When the two take an unexpected detour, she is left stranded in a deserted high school, wondering if there is any escape at all. What follows is a twisted unraveling that will haunt you long after the last page is turned.
In this smart, suspenseful, and intense literary thriller, debut novelist Iain Reid explores the depths of the human psyche, questioning consciousness, free will, the value of relationships, fear, and the limitations of solitude. Reminiscent of Jose Saramago’s early work, Michel Faber’s cult classic Under the Skin, and Lionel Shriver’s We Need to Talk about Kevin, I’m Thinking of Ending Things is an edgy, haunting debut. Tense, gripping, and atmospheric, this novel pulls you in from the very first page…and never lets you go.

I read I’m thinking of Ending Things a few weeks ago while my blog was being redesigned. As you will read below, I had a strong  negative reaction to it. I wrote this review for Goodreads and was hoping I might have warmed a little to this book with some time and a few good reads in between. This has not happened and so the review stands as originally written:

This was a very quick read and it kept me in suspense until the very end. That’s the good news. The bad news? I don’t know what the hell happened. I don’t know how it ended. Seriously.

I Google searched spoilers in an bout of frustration. There is an entire web site dedicated to discussing this very issue. Even the people that loved the book were, for the most part, confused. The general consensus seems to be that if you read the book twice, it’ll all become very clear. Here’s the thing:

I may not be a cardholding member of Mensa, but I think I’m a reasonably smart woman and I don’t want to have to read a book twice in order to understand it. Perhaps I’m too being too demanding here, but I think it’s the author’s job to make me understand the story in one reading.

I’m really, really disappointed as I was loving I’m Thinking of Ending Things to the very end. Or I was loving what I thought I was reading. Now I’m not even sure of that…

I would give this author one more chance because I think he’s a pretty solid writer with a fabulous imagination. I don’t mind a book that gives a good mind you-know-what. I just want to know how the damn thing ends!

Thanks to Gallery/Scout Press for providing me with a free copy of this book in exchange for an honest review.