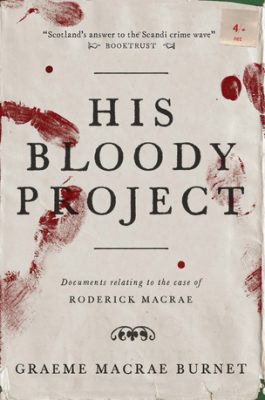 A brutal triple murder in a remote northwestern crofting community in 1869 leads to the arrest of a young man by the name of Roderick Macrae. There’s no question that Macrae is guilty, but the police and courts must uncover what drove him to murder the local village constable.And who were the other two victims? Ultimately, Macrae’s fate hinges on one key question: is he insane?

Is young Roddy insane? The answer to this question will determine whether he lives or dies. You see, he has taken three lives in the small farming village of Culdie, Scotland in the year 1869. There is no doubt that he is the murder. He has freely admitted to being responsible for the killings upon showing up at a neighbor’s house. He’s covered head to foot in blood. He carries with him the murder weapons.

Roddy’s life has not be ideal or easy. His mother is dead, his father is abusive, and he has been forced to discontinue his education in order to labor on his father’s plot of land. He is, however, very intelligent and well-spoken. We learn that one of the victims, who happened to be in a position of power, made it his life’s work to bring undue misery to Roddy and his family. What we don’t understand is how Roddy came to feel he had had no other alternative but to kill the man and two completely innocent victims.

Through an examination of the documents, we become, in a sense, armchair jurists. Do we believe all of details of the account Roddy penned at the behest of his advocate? If not, how much do we believe? Does Roddy’s admission of guilt and preparedness to accept his punishment suggest that he is insane? Or simply willing to be held accountable? Witnesses claim to have seen him muttering to himself on several occasions which surely suggests instability if not insanity.  And do certain inconsistencies in physical evidence vs. accounts also suggest insanity? Or is he perhaps just evil?

Throughout this book, my expectations of how events would unfold kept shifting. I was in a constant state of anticipation. It wasn’t suspenseful in an edge-of-your-seat, nail-biting sense, but I couldn’t put it down.

I was especially impressed to find the characters to be very dimensional despite our getting to know them only through a series of documents. They were all quite complex and many were likable or unlikeable in the extreme. As for Roddy, I still haven’t been able to completely work through my feelings about him.

His Bloody Project is the examination of a criminal justice system not so unlike our own here in the U.S. While it’s true that we no longer impose the sentence of death by hanging, prosecutors and juries must still make decisions regarding criminal insanity, premeditation, justifiable homicide, and mitigating circumstances.

I can certainly understand why this book was shortlisted for the 2016 Man Booker Prize. I’m also very excited to hear that there is a screen adaptation in the works. I would certainly look forward to reading any book written by Graeme Macrae Burnet in the future.

Though I would not compare the book itself to The Guernsey Literary and Potato Peel Pie Society or 84, Charing Cross Road, I think this book is a perfect fit for those who appreciate the unconventional way in which those stories are told and also enjoy crime fiction.

Many thanks to Skyhorse Publishing for providing me with a free copy of this book in exchange for an honest review.