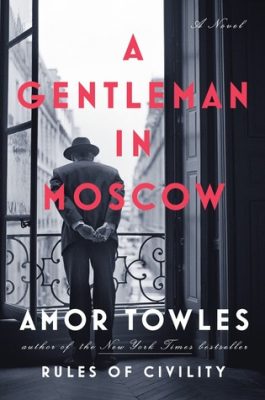 A Gentleman in Moscow by Amor Towles
Published by Viking on September 6th 2016
Pages: 462
Goodreads

From the New York Times bestselling author of Rules of Civility—a transporting novel about a man who is ordered to spend the rest of his life inside a luxury hotel   With his breakout debut novel, Rules of Civility, Amor Towles established himself as a master of absorbing, sophisticated fiction, bringing late 1930s Manhattan to life with splendid atmosphere and a flawless command of style. A Gentleman in Moscow immerses us in another elegantly drawn era with the story of Count Alexander Rostov. When, in 1922, he is deemed an unrepentant aristocrat by a Bolshevik tribunal, the count is sentenced to house arrest in the Metropol, a grand hotel across the street from the Kremlin. Rostov, an indomitable man of erudition and wit, has never worked a day in his life, and must now live in an attic room while some of the most tumultuous decades in Russian history are unfolding outside the hotel’s doors. Unexpectedly, his reduced circumstances provide him a doorway into a much larger world of emotional discovery.
Brimming with humor, a glittering cast of characters, and one beautifully rendered scene after another, this singular novel casts a spell as it relates the count’s endeavor to gain a deeper understanding of what it means to be a man of purpose.

“Some years later, the Count would come to understand that he had been looking at the matter upside down. The pace of evolution was not something to be frightened by. For while nature doesn’t have a stake in whether the wings of a peppered moth are black or white, it genuinely hopes that the peppered moth will persist.”

A Gentleman in Moscow is the story of Count Alexander Ilyich Rostov and his sentence to life-long house arrest at the Metropol Hotel in Moscow. The Bolshevik Tribunal has determined, based on a poem attributed to the Count, as well his status in the leisure class, that the Count is an unrepentant aristocrat who shall live the rest of his days at the hotel as a Former Person or be shot on sight.

You might think the Count would become bitter, resentful, even angry at the world. After all, he was no longer allowed to reside in the elegant suite in which he had spent the past four years. He has been (gasp!) relegated to 100 square feet in the attic. But that just isn’t the Count. On the contrary, he goes about the business of living with his manners and dignity intact.

Over the years, the Count makes many friends including the staff that used to wait on him, a certain willowy actress, travelers to the famous Metropol and its top-notch restaurant, the Boyarsky, and one precocious little girl named Nina. (As Nina matures, she makes decisions which will ultimately have a profound impact on the Count’s life as well.)

One thing I especially appreciated about this book was the male/male relationships that were maintained or formed in this story. Perhaps it’s simply my reading choices but I feel like there are so many books that explore male/female or female/female relationships that it was refreshing to read about the male friendships of thoughtfully developed characters based on loyalty, respect, and shared circumstances.

Of course, these were trying times for the Count and many of his contemporaries. This book is not without a few sad moments, but overall, I found it to be quite uplifting. In fact, there were a few scenes in which I laughed out loud:

“”I know what a ditty is! But under what authority are you whistling one? Eh? Has the Central Committee made you the Commissar of Ditty Whistling? Is that the Grand Order of Dittyness I see pinned to your chest?””

The Count is someone anyone would be privileged to know. He’s truly a gentleman in every sense of the word. He is also clever and resourceful; just the sort you’d want to turn to in a crisis. I would love to have a glass of wine with him at the Shalyapin bar.

With A Gentleman in Moscow, Amor Towles proves once again that he is a master of his craft. Each and every sentence is so carefully and artfully constructed one could weep. The story itself is original and beautifully told. The scenes are rendered in such a way that you could picture each one as movie footage. (I hope someday it is movie footage!) This is one of my favorite books of 2016. Five stars!

Thanks to Viking Books for providing me with a free copy of this book in exchange for an honest review.

Purchase this book on Amazon. (This may result in a small commission.)