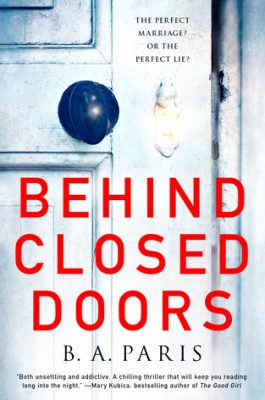 Everyone knows a couple like Jack and Grace: he has looks and wealth, she has charm and elegance. You'd like to get to know Grace better. But it's difficult, because you realize Jack and Grace are never apart. Some might call this true love.
Picture this: a dinner party at their perfect home, the conversation and wine flowing. They appear to be in their element while entertaining. And Grace's friends are eager to reciprocate with lunch the following week. Grace wants to go, but knows she never will. Her friends call—so why doesn't Grace ever answer the phone? And how can she cook such elaborate meals but remain so slim?
And why are there bars on one of the bedroom windows?
The perfect marriage? Or the perfect lie?

Isn’t Grace the luckiest woman alive? She’s beautiful and married to Jack, a handsome and successful attorney. She lives in her dream home; Jack’s wedding gift to her. He dotes on her. They are never apart. And he just loves her sister, Millie. He’s even insisted that Millie, who has Down’s Syndrome, move in with them as she ages out of the residential school she attends.

“Things are not always what they seem; the first appearance deceives many; the intelligence of a few perceives what has been carefully hidden.” ― Phaedrus

This is one crazy, twisted, and sick book. I could not put it down, and when I was forced to, I could not stop thinking about it. I haven’t had such a visceral reaction to a book in a long, long time. I watch a lot of Investigation Discovery and this book gave me a feeling similar to those I experience when watching a show about a particularly evil person or crime. It just felt sooooo real.

I understand that some people might think the plot is a little far fetched. However, as someone who watches a lot of I.D., I would argue that, from time to time, stories similar to this make headline news and everyone shakes their head saying, “But he/she seemed so normal/well-respected/hard-working/kid, etc. We had no idea.”

The characters, for better or worse, are very well-developed and complex. When stuff really starting hitting the fan at the beginning of the book, I had a perception of Grace’s character that turned out to be all wrong and I was delighted! Unfortunately I was spot-on where Jack is concerned. One can only love Millie. And Grace’s friend Esther? I want her to be my friend too!

Behind Closed Doors is the best psychological thriller I’ve read in a long time. If you’re looking for a book that will keep you on the edge of your seat, this is it. Sure, you’ll have to read through some pretty sadistic and depraved stuff, but isn’t that the fun of it??

And the moral of the story is…

Many thanks to St. Martin’s Press for providing me with a free copy of this book in exchange for an honest review.