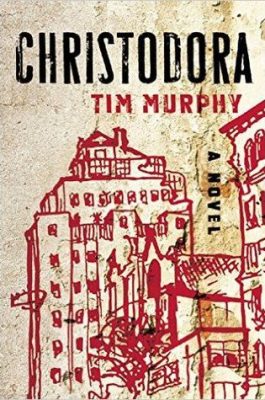 In this vivid and compelling novel, Tim Murphy follows a diverse set of characters whose fates intertwine in an iconic building in Manhattan’s East Village, the Christodora. The Christodora is home to Milly and Jared, a privileged young couple with artistic ambitions. Their neighbor, Hector, a Puerto Rican gay man who was once a celebrated AIDS activist but is now a lonely addict, becomes connected to Milly and Jared’s lives in ways none of them can anticipate. Meanwhile, Milly and Jared’s adopted son Mateo grows to see the opportunity for both self-realization and oblivion that New York offers. As the junkies and protestors of the 1980s give way to the hipsters of the 2000s and they, in turn, to the wealthy residents of the crowded, glass-towered city of the 2020s, enormous changes rock the personal lives of Milly and Jared and the constellation of people around them. Moving kaleidoscopically from the Tompkins Square Riots and attempts by activists to galvanize a true response to the AIDS epidemic, to the New York City of the future, Christodora recounts the heartbreak wrought by AIDS, illustrates the allure and destructive power of hard drugs, and brings to life the ever-changing city itself.

Christodora contains all of the elements you’d expect to find in an epic novel. There’s 40 years worth of history, tragedy, triumph, and human drama. Surprisingly, it’s well laid out in only 428 pages. I mention this because I can only imagine the difficulty in finding the balance between providing enough context and detail without adding unnecessary length.

This novel essentially the story of NYC as it comes to grips with the AIDS crisis beginning in the 1980’s. It’s as much a history primer as you’ll find in any work of fiction on the subject of HIV/AIDS. From the sigma HIV diagnosed people faced to the development of antiviral drugs, to the devastating effects the disease had, particularly in the gay community, it’s all covered. The author, Tim Murphy, himself a gay man having been diagnosed with HIV in his late twenties in NYC, has boldly shared a raw, realistic, no-holds-barred narrative of a moment in time that brought out the very best and worst in American society.

I was a nursing student and young nurse in the early 90’s and there are no words to express the how horrible a disease AIDS was then, when a diagnosis pretty much meant that you would develop AIDS at some point in the not too distant future and die an agonizing death. The emotional toll was just as great as the physical with patients often dying without the benefit of family members to comfort them. There were even some healthcare professionals who refused to care for HIV positive patients. At my last job, I found an old textbook in the library which advised that there was great likelihood that HIV could be spread through tears… Fear can make people behave in very ugly ways. Fortunately, crisis can also bring out the best in people, creating unlikely alliances, and bringing forth reluctant heroes as in the case of a few of the characters in this book.

In Christodora, there is no aspect of the human condition that is left untouched. Physical and mental illness, drug/alcohol abuse, identity searches, and all types of relationships are explored. Again, the manner in which this story is told is both realistic and raw and may not be for the faint of heart. That said, I didn’t find even the more graphic passages to be sensationalistic or gratuitous.

I found the characters to be well-developed, though I didn’t really identify with any of them. In fact, there wasn’t one character I found to be completely likable. All of the main characters were endearing one moment and frustrating the next. In other words, they were human.

If I had one criticism, it would be that there were times when I found the timeline a little tough to follow. It wasn’t a huge deal, but I did have to flip back to the beginning of the previous chapter to check the date on a couple of occasions.

Overall, though, I felt this was a very good book. I would highly recommend it to young people who aren’t able to recall memories of breaking news that “another person has just been diagnosed with the mysterious illness that seems affecting gay men.”. We have come a long way but we mustn’t forget…

For more information on the history of HIV/AIDS in the United States, visit AIDS.gov

Thanks to Grove Atlantic for providing me with a free copy of this book in exchange for an honest review.

Purchases made through links on this site may result in a small commission.