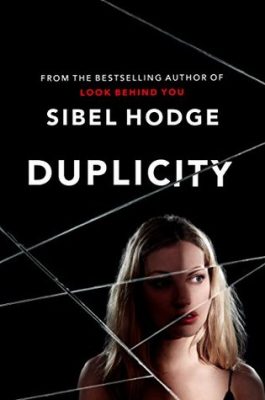 There are three sides to every story: Yours. Mine. And the truth…
Max and Alissa have a fairy tale life—newlywed, madly in love and enviously rich. Then Max is brutally stabbed to death at their home and Alissa, miraculously, escapes with her life. But why was she spared?
The hunt for the killer begins, uncovering a number of leads—was Max’s incredible wealth the motive? Had his shady business practices finally caught up with him? Or was it a stalker with a dangerous obsession?
Devoted friends rally around gentle, sweet Alissa as she is left to mourn the loss of her husband and pick up her life. But not everyone is who they seem…Deep-rooted jealousies, secrets and twisted love lie just beneath the surface, and not all fairy tales have a happy ending.
Duplicity is a suspenseful thriller from the bestselling author of Look Behind You and Where the Memories Lie.

From the outside, Max and Alissa seem to have the perfect marriage. They should. They’re filthy rich and have only been married for two months… But everything is not always as it seems. Or is it?

Duplicity is a clever and well-paced story of murder and mayhem. I was kept in suspense from the very first page where we are introduced to The Other One. At first, all we know about the other one is that he/she is obviously a psychopath, a (favorite and) necessary element in any thriller as far as I’m concerned.

The Detective is DS Carter, a thoroughly likable, moral, seasoned detective who has been overlooked for a promotion in favor of “a twat” named ADI Wilmott.

Wilmott is a narcissistic, womanizing, and generally unlikable fellow. He becomes so besotted with the stunningly beautiful Alissa that his objectivity is clearly non-existent. If I’m honest, it was a bit maddening. I rather wanted to throttle him.

There’s a history of bad blood between Wilmott and Carter. They had worked together on an earlier case involving a rich and powerful Lord. When politics dictated the case not be properly investigated, Carter became angry and disillusioned. Wilmott became complicit. Hence, his promotion… This made for an entertaining bit of conflict/struggle between good vs. evil.

The chapters seamlessly alternate between The Detective and The Other One. I love novels with alternating points of view and this is book is a perfect example of how, when it’s done right, it can keep things fresh and add an interesting dimension. Sibel Hodge does an amazing job of keeping the voices very distinct. Though The Other One was clearly not meant to be a hero or heroine, I loved reading those chapters the most as there was a bit of a cheeky element to the character that sometimes made me smile.

Halfway or so through the story, the identity of the killer is revealed. Oddly enough, this in no way made the second half less suspenseful than the first. In fact, in many ways, the ensuing events quickened the pace. And there were a few twists and turns that I didn’t see coming until the very end.

Though at times the story seemed a bit far-fetched, anything this book lacked in believability, it more than made up for in creativity and the page-turner factor.

I’m hoping there will be a sequel to this book. I don’t want to reveal any spoilers but I was excited by the direction in which DS Carter’s life going at the end of the book and I’d love to read about his future investigations.

Purchase this book on Amazon. (This may result in my receiving a small commission.)

Many thanks to Thomas and Mercer for providing me with a free copy of this book in exchange for an honest review.