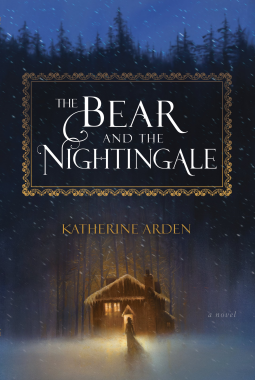 The Bear and the Nightingale by Katherine Arden
Published by Del Rey on January 10th 2017
Pages: 336
Goodreads

At the edge of the Russian wilderness, winter lasts most of the year and the snowdrifts grow taller than houses. But Vasilisa doesn’t mind—she spends the winter nights huddled around the embers of a fire with her beloved siblings, listening to her nurse’s fairy tales. Above all, she loves the chilling story of Frost, the blue-eyed winter demon, who appears in the frigid night to claim unwary souls. Wise Russians fear him, her nurse says, and honor the spirits of house and yard and forest that protect their homes from evil.
After Vasilisa’s mother dies, her father goes to Moscow and brings home a new wife. Fiercely devout, city-bred, Vasilisa’s new stepmother forbids her family from honoring the household spirits. The family acquiesces, but Vasilisa is frightened, sensing that more hinges upon their rituals than anyone knows.
And indeed, crops begin to fail, evil creatures of the forest creep nearer, and misfortune stalks the village. All the while, Vasilisa’s stepmother grows ever harsher in her determination to groom her rebellious stepdaughter for either marriage or confinement in a convent.
As danger circles, Vasilisa must defy even the people she loves and call on dangerous gifts she has long concealed—this, in order to protect her family from a threat that seems to have stepped from her nurse’s most frightening tales.

Set in northern Rus’ during medieval times, The Bear and the Nightingale is the beautifully told story of Vasilisa Petrovna.  Marina, Vasya’s mother knew that the child’s birth would mean her own death but she wanted her desparately. Her own mother had had special gifts and powers and she knew Vasya would inherit them.

When Vasya is a young girl, she is primarily raised by Dunya, the loving old nurse who’d been with the family for years. She and Dunya take care of the little domovoi who protects the house, giving him gifts of food and drink. As Vasya continues to grow, she develops relationships with the other cheryti around the home, in the barns, and in the waters and forests of her father’s land. (The cheryti are sprite-like creatures with various personalities and duties.) Though the winters are hard, her father, Pyotr Vladimirovich, is able to provide for his family and the village he is responsible for.

Before long, though, Pyotr decides that the time has come for him to take a new wife to care for his children and home. He travels to Moscow to meet with the Grand Prince, who happens to be his late wife’s brother. In a deal with the Ivan the Fair, he is given Ivan’s  own daughter, Anna, to wed. He is most grateful as this union seems to be one above his own standing and to a wife who will be pious and compliant. What Pyotr doesn’t know is that Anna is considered mad by those who know her. She claims to see demons. She spends her time hiding in the church as she claims it’s the only place she can escape them. Nevertheless, they are wed and she comes to live with Pyotr and his family.

A subsequent series of events in Moscow bring Konstantin, a priest, to live in the village. He is a fire and brimstone preacher who uses religion to intimidate and shame his parishioners. He condemns the traditions and old ways of the villagers. They cease taking care of the cheryti and abandon their traditions out of fear. Soon enough, crops begin to fail, the winter months don’t end, and the very existence of the villagers is threatened.

Konstantin and Anna  align forces to have Vasya married off or sent to a convent. He is threatened by her very presence as she, of course, defies the church. She understands the cause of their problems. And she will do everything in her power to restore harmony. Even if that means setting out on her own to deal with the powerful forces responsible.

I don’t want to reveal too many of the actual details of  Vasya’s story and adventures but I will say that I loved every moment of it. Katherine Arden has done a magnificent job in giving us a magical story with relevant and relatable themes throughout. If you stripped away all of the “magical” elements (though you’d never want to, trust me) you’d have a story that illuminates the ways in which our perceptions may differ depending on whether we come from a place of love or fear. You’d have a story that shows the ways in which religion is sometimes used for personal gain, to shame others for one’s own shortcomings, or as justification for judging others. You’d have a story about the difficulties brave, strong, noncompliant, and misunderstood women have faced throughout history. And good vs. evil. There’s that, of course.

I would love to see this book made into movie. The descriptions of the characters and the landscape were so incredibly beautiful in words that I can only imagine how lovely they’d be on the big screen. I know, I know, the movie is never quite as good but if were even half as good, it would be great.

To state the obvious, this book is a brilliant debut. I would highly recommend it even if magical realism is not your usual genre. (It’s not mine either.) This book is perfect for fans of literary and historical fiction with an open mind. I’m already looking forward to Katherine Arden’s next book.

Many thanks to Del Rey for providing me with a free copy of this book in exchange for an honest review.