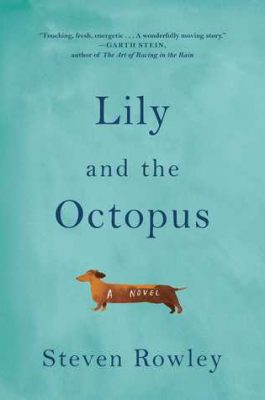 Lily and the Octopus by Steven Rowley
Published by Simon & Schuster on June 7th 2016
Pages: 320
Goodreads

This is a story about that special someone: the one you trust, the one you can’t live without.
For Ted Flask, that someone special is his aging companion Lily, who happens to be a dog.

Lily and the Octopus opens on a Thursday evening. Ted knows it was a Thursday because that’s the day he and Lilly, his beloved dachshund, reserve for talking about boys they think are cute. (They don’t always agree but they do tend toward younger men.) He suddenly notices the octopus. On Lily’s head. He’s not sure how or when it came to reside there and he clearly feels some guilt over not having noticed it sooner. He, of course, understands what the octopus is but he will not call it anything other than “the octopus”.  Not when speaking about it to his best friend, Trent. Or to his questionably competent therapist, Jenny. Not even to Lilly’s own veterinarian.

Throughout the book, we learn about how Ted came to choose Lily (the runt of the litter!), and the many adventures (real and imagined) they’ve had together throughout the years.

The one thing that struck me throughout this story was how authentic Ted’s voice was. There was no doubt in my mind that Steven Rowley had loved and lost a dog at some point.  The anthropomorphizing was so spot-on! I can just see Lily talking to Ted. A head tilt here, an averted gaze there. I totally get how he knew what she was thinking at every moment.

I don’t think it’s much of a spoiler to say that, at the end of this book, Lilly does lose her battle with the octopus. And yes, I did cry a fair amount. But this book is so much more than your typical loved-and-lost dog story . It’s about self-discovery, unconditional love, and a life well-lived.

To be fair, I realize have a different perspective than most on the loss of an old dog such as Lily. You see, Lily was one of the lucky ones. She lived with and was loved by the same person her whole life. Only 10% of dogs are so lucky. 10%!! And though she was 12, which is not super-old for a doxie, she had lived a fairly long life.  So, while I felt so sorry for Ted, I was able to feel happy for Lily in many ways. I see so much suffering and cruelty in the dog rescue world. I wish they could all live and die like Lily; with life-long respect, dignity, and love.

I loved reading this interview with the author featured on Electric Lit.  He talks about giving Lily a voice, his insistence that Lily have an octopus (a giraffe would not have worked), and his unwillingness to allow the book to be de-gayed. The latter of which, thankfully, was not an issue to anyone except Surely (not her real name) on Goodreads.

I’m so happy that I finally read this book. Some part of me probably procrastinated in some Freudian way fearing the sadness but I needn’t have worried. The scales still managed to tip toward happy here. And I can now cross this book off my 2017 Mount TBR Challenge. I’ll also be posting a link to this review from Read Diverse Books  as I’m participating in The Read Diverse 2017 Challenge this year as well. Read Diverse Books is committed to reviewing, discussing, and promoting books written by and about people of color and other marginalized voices. If you’re not already subscribing, please check out Naz’ blog!

Many thanks to Simon and Schuster for providing me with a free copy of this book in exchange for an honest review.