The Zookeeper’s Wife by Diane Ackerman. 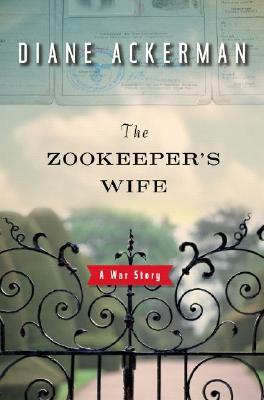 When Germany invaded Poland, Stuka bombers devastated Warsaw—and the city’s zoo along with it. With most of their animals dead, zookeepers Jan and Antonina Zabinski began smuggling Jews into empty cages. Another dozen “guests” hid inside the Zabinskis’ villa, emerging after dark for dinner, socializing, and, during rare moments of calm, piano concerts. Jan, active in the Polish resistance, kept ammunition buried in the elephant enclosure and stashed explosives in the animal hospital. Meanwhile, Antonina kept her unusual household afloat, caring for both its human and its animal inhabitants—otters, a badger, hyena pups, lynxes.With her exuberant prose and exquisite sensitivity to the natural world, Diane Ackerman engages us viscerally in the lives of the zoo animals, their keepers, and their hidden visitors. She shows us how Antonina refused to give in to the penetrating fear of discovery, keeping alive an atmosphere of play and innocence even as Europe crumbled around her.

While I read a lot WWII fiction, The Zookeeper’s Wife was of particular interest to me as it told of the real-life stories of those caring for the animals in the Warsaw Zoo during the Nazi occupation. I was drawn in from the first paragraph of the Author’s Note.

“Jan and Antonia Zabinski were Christian zookeepers horrified by Nazi racism, who capitalized on the Nazis’ obsession with rare animals in order to save over three hundred doomed people. Their story has fallen between the seams of history, as radically compassionate acts sometimes do. But in wartime Poland, when even handing a thirsty Jew a cup of water was punishable by death, their heroism stands out as all the more startling”

I remember this book as being one of my favorites of 2007. It’s hard to believe so much time has passed since its original publication, but there it is on the title page: ©2007. I read this book when it was newly released. If I’m doing the math correctly, that was 10 years ago. When I was… well never mind. Age is just a number, right??

Jan, Antonia, and even their young son amazed and inspired me with their bravery, heroism, compassion, and selflessness. I’m surprised to see an average rating of only 3.46/5 stars on Goodreads. For me it was easily a five star read. What I’m not surprised by is the number of people who’ve recently added the book to their TBR. I’m sure this has something to do with the fact that the film adaptation is in theaters now. I hope to the movie this weekend. The trailer is amazing!

When I looked at movie times on Fandango today, I noticed that most, if not all, theaters were offering the audiobook for free with your ticket purchase. I’m not sure if that’s the case in all areas but thought it was worth mentioning.

I’d love to hear your thoughts if you’ve read the book and/or seen the movie!