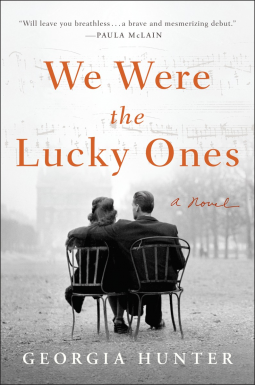 We Were the Lucky Ones by Georgia Hunter
Published by Viking on February 14th 2017
Pages: 416
Goodreads

Reading Georgia Hunter s We Were the Lucky Ones is like being swung heart first into history. . . . A brave and mesmerizing debut, and a truly tremendous accomplishment. Paula McLain, New York Timesbestselling author of The Paris WifeAn extraordinary, propulsive novel based on the true story of a family of Polish Jews who are separated at the start of the Second World War, determined to survive and to reunite
It is the spring of 1939 and three generations of the Kurc family are doing their best to live normal lives, even as the shadow of war grows closer. The talk around the family Seder table is of new babies and budding romance, not of the increasing hardships threatening Jews in their hometown of Radom, Poland. But soon the horrors overtaking Europe will become inescapable and the Kurcs will be flung to the far corners of the world, each desperately trying to navigate his or her own path to safety.
As one sibling is forced into exile, another attempts to flee the continent, while others struggle to escape certain death, either by working grueling hours on empty stomachs in the factories of the ghetto or by hiding as gentiles in plain sight. Driven by an unwavering will to survive and by the fear that they may never see one another again, the Kurcs must rely on hope, ingenuity, and inner strength to persevere.
A novel of breathtaking sweep and scope that spans five continents and six years and transports readers from the jazz clubs of Paris to Krakow s most brutal prison to the ports of Northern Africa and the farthest reaches of the Siberian gulag, We Were the Lucky Ones demonstrates how in the face of the twentieth century's darkest moment, the human spirit can find a way to survive, and even triumph.

We Were the Lucky Ones is the fictionalized account of the true story of the Kurc family and their experiences during WWII beginning in their home town of Radom, Poland in 1939. The book spans eight years as we follow the Kurc family members to several countries and continents including Austria, Italy, Argentina, South America, and Siberia, Russia as the war continues and finally ends.

As many of you know, I read a lot of WWII fiction. This book is very special in that, if it weren’t a true story, I would have thought it unbelievable. I would be writing things like “wrapped up a little too neatly” and “implausible”. But this is a story based in fact and lovingly told by Georgia Hunter, the granddaughter of Eddy Kurc (Addy in the book). She wasn’t aware of her own family’s history until she was fifteen years old.

It’s obvious from the start that this book has been well researched. In the Author’s Notes and Acknowledgements we learn that Georgia Hunter has traveled the world and spent countless hours interviewing family members. I can only imagine how it must have felt to hear all of these stories and learn so much of the history of such close family members. I’m so glad she decided to write a novel about their stories as opposed to a nonfiction work. She did a remarkable job of giving dimension and voice to the characters.

Prior to each chapter which alternate between characters, the author has woven in historical points of fact which remind us of the horror and devastation that was the Holocaust. I found this had a very grounding effect.

“By the end of the Holocaust, 90 percent of Poland’s three million Jews were annihilated; of the more than thirty thousand Jews who lived in Radom, fewer than three hundred survived.”

I highly recommend this book to anyone who loves to read WWII fiction or family or individual-centered (vs. strictly military history)  WWII nonfiction. I’m sure this is only the beginning for Georgia Hunter as a novelist and I’ll certainly be one of the first in line for her next book.

Many thanks to Viking for providing me with a free copy of this book in exchange for an honest review.