My pick of the week is:

Equal of the Sun by Anita Amirrezvani 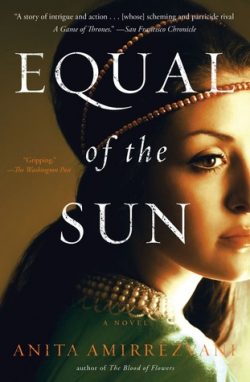 Iran in 1576 is a place of wealth and dazzling beauty. But when the Shah dies without having named an heir, the court is thrown into tumult. Princess Pari, the Shah’s daughter and protégée, knows more about the inner workings of the state than almost anyone, but her maneuvers to instill order after her father’s sudden death incite resentment and dissent. Pari and her closest adviser, Javaher, a eunuch able to navigate the harem as well as the world beyond the palace walls, possess an incredible tapestry of secrets that explode in a power struggle of epic proportions.

Legendary women—from Anne Boleyn to Queen Elizabeth I to Mary, Queen of Scots—changed the course of history in the royal courts of England. While they are celebrated, few people know of the powerful and charismatic women in the Muslim world. Based loosely on Princess Pari Khan Khanoom, Equal of the Sun is a riveting story of political intrigue that brings one extraordinary woman to light. Anita Amirrezvani is a master storyteller, and her lustrous prose brings to life this rich and labyrinthine world with a stunning cast of characters—passionate and brave men and women who defy or embrace their destiny in a Machiavellian game played by those who lust for power and will do anything to attain it.

Looking back, I probably should have given this book five stars. (I gave it four stars on Goodreads before I began writing narrative reviews.) It’s not often that I can recall the emotions I experienced in reading a book several years later. This one stuck with me.

As for the characters, Pari is an amazing woman. After her father’s death, she is faced with making some unpopular decisions. As one would expect, it was difficult for a woman of that time to be respected and trusted in a position of leadership. Javaher, her closest advisor, is a character to love. This book is written in the first person from his point of view. Their relationship is beautiful and symbiotic. I recall that the last chapter, and especially the last paragraph, moved me to tears.

I’m a little saddened that this book didn’t get the ratings or hype I feel it deserved. I think it would have made a great TV mini-series. In my opinion, it’s right up there with books such as Pope Joan  and The Red Tent.