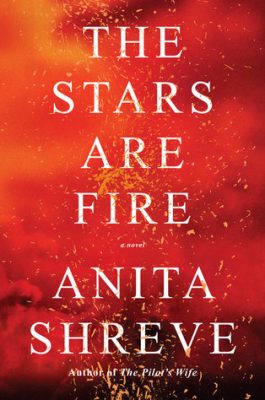 The Stars Are Fire by Anita Shreve
Published by Random House on May 2nd 2017
Pages: 256
Goodreads

From the New York Times best-selling author of The Weight of Water and The Pilot's Wife (an Oprah's Book Club selection): an exquisitely suspenseful new novel about an extraordinary young woman tested by a catastrophic event and its devastating aftermath--based on the true story of the largest fire in Maine's history.
In October 1947, after a summer long drought, fires break out all along the Maine coast from Bar Harbor to Kittery and are soon racing out of control from town to village. Five months pregnant, Grace Holland is left alone to protect her two toddlers when her husband, Gene, joins the volunteer firefighters. Along with her best friend, Rosie, and Rosie's two young children, Grace watches helplessly as their houses burn to the ground, the flames finally forcing them all into the ocean as a last resort.
The women spend the night frantically protecting their children, and in the morning find their lives forever changed: homeless, penniless, awaiting news of their husbands' fate, and left to face an uncertain future in a town that no longer exists. In the midst of this devastating loss, Grace discovers glorious new freedoms--joys and triumphs she could never have expected her narrow life with Gene could contain--and her spirit soars. And then the unthinkable happens--and Grace's bravery is tested as never before.

Having never read any of Anita Shreve’s earlier novels, I was drawn to The Stars are Fire because I enjoy learning about historical events I know little or nothing about. This events in this book unfold as a result of what has become know as the Great Fires of 1947, a series of forest fires that devastated hundreds of thousands of acres in Maine.

Grace Holland is five months pregnant when the fires rip through her neighborhood, destroying everything in their wake. Grace is smart and resourceful. She manages to save herself, her two small children, her best friend, Rosie, and Rosie’s children. Her husband, Gene, with whom she shares a dispassionate though not horrible marriage, has been called to help the men of the town build a fire wall. But as the other men begin to return home, Gene remains missing. Finally, homeless and destitute, Grace is forced to consider moving into her recently deceased mother-in-law’s home. As she arrives to check out the condition of the home, she is greeted by beautiful piano music. Enter Aiden, the handsome, educated, piano-playing squatter.

Things go along just swimmingly for a time. Grace gets a job at the local physician’s office. Her mother, now living with her, cares for the house and the children. Grace and Aiden seem to be growing closer together. When Aiden leaves for a job in Boston, they are both hopeful that it won’t be the end. Unfortunately, a sudden (and somewhat expected, if I’m honest) plot twist occurs. You can probably see where this is going but I do not wish to add any spoilers.

Overall, I enjoyed the book quite a lot. This wasn’t an edge-of-the seat book for me but I found the pacing to be steady and enjoyable. My rating is a reflection of the balance between fabulous writing and character development and a somewhat clichéd and predictable story. Though this wasn’t a five star read for me, I can certainly understand why Anita Shreve has such a devoted following and I would be open to reading her past or future titles.

Thanks to the publisher, Alfred A. Knopf, for providing me with a free copy of this book in exchange for an honest review.