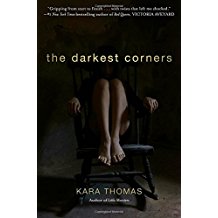 The Darkest Corners is a psychological thriller about the lies little girls tell, and the deadly truths those lies become.
There are ghosts around every corner in Fayette, Pennsylvania. Tessa left when she was nine and has been trying ever since not to think about it after what happened there that last summer. Memories of things so dark will burn themselves into your mind if you let them.
Callie never left. She moved to another house, so she doesn’t have to walk those same halls, but then Callie always was the stronger one. She can handle staring into the faces of her demons—and if she parties hard enough, maybe one day they’ll disappear for good.
Tessa and Callie have never talked about what they saw that night. After the trial, Callie drifted and Tessa moved, and childhood friends just have a way of losing touch.
But ever since she left, Tessa has had questions. Things have never quite added up. And now she has to go back to Fayette—to Wyatt Stokes, sitting on death row; to Lori Cawley, Callie’s dead cousin; and to the one other person who may be hiding the truth.
Only the closer Tessa gets to the truth, the closer she gets to a killer—and this time, it won’t be so easy to run away.

Though I managed to get through The Darkest Corners fairly quickly, I must say it didn’t quite live up to my expectations. I’ve questioned whether or not that might be because I don’t read a lot of YA fiction. I did my best to think about how my teen or YA self would have perceived the book. In the end, I really believe I would have struggled with the issues I had regardless.

The pacing was perfect. Though I was never kept at the edge of my seat, I found the pace to be steady and satisfying. I thought the plot had excellent potential.  Even after I found myself not loving the book, I felt compelled to read on.

I had major issues with many of the characters in this book. I found most of them to be stereotyped, predictable, and one dimensional. Their relationships with one another were also, for the most part, not very complex. The one exception to this is the relationship between Tessa and Callie. I found the tension between them at the beginning of the book to be palpable. I looked forward to the resolution of all that had been left up in the air since that long-ago summer.

As for the story itself, I had a couple of problems. First, it had too much going on. Normally, in a mystery or thriller, it’s good to have multiple suspects. In this book, however, the number of different suspects, motives, and theories made for an implausible storyline. I also felt that the storyline felt a little “all over the place” for lack of a better term. There were times when the sequencing of events or flow just didn’t feel right.

The ending was what turned this from a three or three and a half star review to a two and a half star review. As implausible as the story was throughout, the ending really took the cake. I was left with my head spinning in a not-good way. While I applaud the author’s vivid imagination, I think the book would have been better served if it had been toned down a bit for the sake of believability.

Thanks to Ember, an imprint of Random House Children’s Books, for providing me with a free copy of this book in exchange for an honest review.