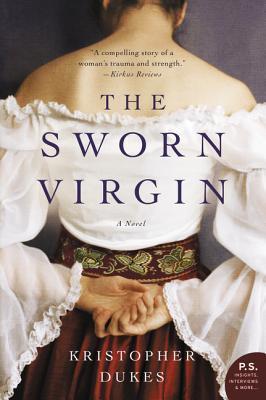 Dukes's gripping historical novel tells the tale of a desperate Albanian woman who will do whatever it takes to keep her independence and seize control of her future...even if it means swearing to remain a virgin for her entire life.When eighteen-year-old Eleanora’s father is shot dead on the cobblestone streets of 1910 Albania, Eleanora must abandon her dream of studying art in Italy as she struggles to survive in a remote mountain village with her stepmother Meria.

Nearing starvation, Meria secretly sells Eleanora into marriage with the cruel heir of a powerful clan. Intent on keeping her freedom, Eleanora takes an oath to remain a virgin for the rest of her life—a tradition that gives her the right to live as a man: she is now head of her household and can work for a living as well as carry a gun. Eleanora can also participate in the vengeful blood feuds that consume the mountain tribes, but she may not be killed—unless she forsakes her vow, which she has no intention of ever doing.

But when an injured stranger stumbles into her life, Eleanora nurses him back to health, saving his life—yet risking her own as she falls in love with him...

As a avid reader of historical fiction, I was first attracted to The Sworn Virgin because it introduced me to a subject I knew nothing about – the sworn virgins of Albania. While I’ve read many novels with strong female characters that dared to reject their traditional societal roles, I had never read one set in Albania so that was also a big draw.

When I began the book and learned that Eleanora and her father, Fran, traveled together as healers, the nurse in me became even more excited. If only Eleanora could’ve had more time with her beloved Baba! I would have loved to hear more of their voyages to heal the sick and injured. Sadly, this was not to be as Baba was killed in a blood feud early on, leaving Eleonora alone to make the journey home to deliver the sad news to her stepmother, Meria.

I admittedly had some difficulty with Meria’s character. Though I could empathize with her on some levels, I was angry that she would force Eleanora into marriage with a cruel man; especially knowing how much her husband had wanted his daughter to be happy and independent. I felt that it was something of a betrayal of his memory and struggled to accept that it was simply the way of the times.

When, having almost no options, Eleanora takes the oath of a sworn virgin, I felt very conflicted. After all, one has only to read the blurb to understand that this may not end well…

I thought the pacing of this book was slow but steady for the first half. It gradually picked up. Then, with a couple of twists, the last hundred pages flew by. The ending was something of a surprise and the perfect set-up for a sequel.

Though it is very clear that the author did a tremendous amount of research on the subject of sworn virgins, Eleanor’s time as a sworn virgin was shorter than I had anticipated. I selfishly would have liked her to have had more time as a sworn virgin, if only so that I could’ve learned more about what her day-to-day life may have been like.

Had the date of this story, 1910, not been disclosed at the beginning of this book, I would never have guessed the century in which these events had taken place. It was difficult for me to grasp that these events could have happened in what is the relatively recent past. I felt compelled to learn more about the sworn virgins and was surprised to see the amount of information and recent articles on the sworn virgins of Albania including this NY Times article, this piece in the Guardian, and this short video at nationalgeographic.com.

Whether or not it is a sequel to The Sworn Virgin, I look forward to reading Kristopher Dukes’s next novel. 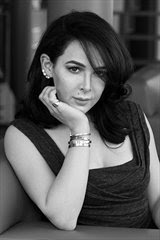 Kristopher Dukes was born and raised in Los Angeles, California. She has been a nationally published writer since she was in high school. Her work has been featured in the bestselling book series Written in the Dirt and fashion bible WWD. She has been profiled in Vogue.fr, NY Times.com, Fast Company, Forbes.com, and WWD. The Sworn Virgin is her debut novel. She lives in Manhattan Beach, California, with her husband, Matt, and Doberman, Xena.

Thanks to TLC Book Tours and William Morrow for providing me with a free copy of this book in exchange for an honest review.