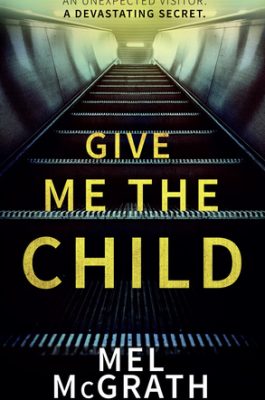 Give Me the Child by Mel McGrath
Published by HQ on October 24th 2017
Pages: 384
Goodreads

‘You won’t want to eat, sleep or blink’ Tammy Cohen

Dr Cat Lupo aches for another child, despite the psychosis which marked her first pregnancy. So when Ruby Winter, a small girl in need of help, arrives in the middle of the night, it seems like fate.

But as the events behind Ruby’s arrival emerge – her mother’s death, her connection to Cat – Cat questions whether her decision to help Ruby has put her own daughter at risk.

Do we get the children we deserve?

Cat’s research tells her there’s no such thing as evil. Her history tells her she’s paranoid. But her instincts tell her different. And as the police fight to control a sudden spate of riots raging across the capital, Cat faces a race against time of her own…

“Who was the creature, this mother, wife, psych, who looked like me and sounded like me, but who had never once in a dozen years suspected her husband of cheating, let alone having another child?”

Give Me the Child is a page-turner straightway! It’s told in the first person by Cat, who learns her husband has another child after a middle-of-the-night knock on the door. The mother of the child has died and husband Tom must now raise his daughter, Ruby Winter.

So…. My first thought was that the you-know-what was going to hit the fan in a very big way. I think very few women could keep it together if they found out their husband had fathered another child so very close in age to the one they share together. But Cat seems to be taking this all in stride. Okay, I get it. You don’t want to cause a big scene in front of the children, right? You are going to really give it to him the first chance you get, right?? I could not believe it, but she didn’t!! She was impossibly passive and compliant with the whole thing, though she wasn’t thrilled. There were times I wanted to scream at her:

But perhaps she is pressured to maintain an even keel because of her history of psychosis. She wouldn’t want Tom thinking she was having another “episode”.  If she divorces Tom, she could risk losing custody of their daugther, Freya. Maybe she’s just one of those people who forgives easily. Perhaps her professional training has taught her to maintain her composure even under the most stressful of circumstances. Or maybe she’s hiding something herself. Do we have an unreliable narrator on our hands?

Things go from weird to weirder when we begin to become acquainted with Ruby Winter. She isn’t behaving like the typical grieving child. However, Tom makes the valid argument that grief can manifest itself if different ways. The poor thing has had a difficult upbringing, after all. Still, Cat becomes increasingly unsettled when she begins to notice certain exchanges between Freya and Ruby. As Ruby’s behavior becomes more and more concerning, she advises Tom that she feels Ruby needs professional help. For some reason, Tom is absolutely opposed to the idea. Relying on her intuition, Cat does a bit of digging into the death of Ruby’s mother, Lilly Winter. She feels uneasy but she has no proof of wrongdoing. The nagging feeling stays with her. She does a little snooping in the home office Tom is always locked in. She’s not the snooping kind (of course she’s not) but what she finds shocks her. She begins to think:

As Cat is trying to make sense of all of this and ensure that her daughter is safe in their mess of a household, things are getting tense at Cat’s place of work, known as The Institute. Cat studies psychopathy, otherwise known as CU (callous and unemotional) personality disorder in children. She is working with a particularly disturbed boy whose family dynamics further complicate his case. London is in turmoil with murders and riots all around. Cat is being hounded by a reporter from her past. Needless to say, all of these things compounded have Cat functioning under a great deal of stress. Her own sister questions her stability.

The thing I loved most about this Give Me the Child was that it had me asking questions until the very end. When it comes to reading mysteries, I love being lead and mislead at the same time. Mel McGrath subtly offered clues that had my mind going in different directions from paragraph to paragraph at times.

The ending was both surprising and frustrating. (I’m wondering if we might hear from Dr. Cat Luppo again.)

Mel McGrath previously published a series of three mysteries under the name MJ McGrath. This is her first published standalone novel. I will certainly look forward to reading her next.

Thanks to HQ for providing me with a free copy of this book in exchange for an honest review.