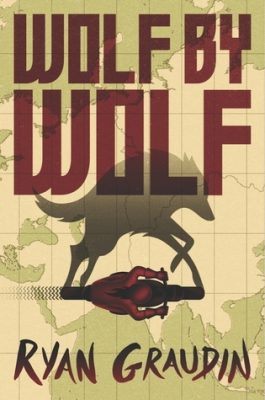 Her story begins on a train.

The year is 1956, and the Axis powers of the Third Reich and Imperial Japan rule. To commemorate their Great Victory, Hitler and Emperor Hirohito host the Axis Tour: an annual motorcycle race across their conjoined continents. The victor is awarded an audience with the highly reclusive Adolf Hitler at the Victor’s Ball in Tokyo.

Yael, a former death camp prisoner, has witnessed too much suffering, and the five wolves tattooed on her arm are a constant reminder of the loved ones she lost. The resistance has given Yael one goal: Win the race and kill Hitler. A survivor of painful human experimentation, Yael has the power to skinshift and must complete her mission by impersonating last year’s only female racer, Adele Wolfe. This deception becomes more difficult when Felix, Adele twin’s brother, and Luka, her former love interest, enter the race and watch Yael’s every move.

But as Yael grows closer to the other competitors, can she bring herself to be as ruthless as she needs to be to avoid discovery and complete her mission?

From the author of The Walled City comes a fast-paced and innovative novel that will leave you breathless.

Today I’m going to share the first couple of paragraphs of Wolf by Wolf. This is a book that’s been sitting on my shelf for quite a while now. I’m woefully behind on reviews and have a few blogging commitments in the coming weeks but the very next chance I get to just grab a book off the shelf, it’s going to be Wolf by Wolf.

“There were five thousand souls stuffed into the train cars—thick and deep like cattle. The train groaned and bent under their weight, weary from all its many trips. (Five thousand times five thousand. Again and again. So many, so many.)

No room to sit, no air to breathe, no food to eat. Yael leaned on her mother and strangers alike until her knees ached (and long, long after). She choked in the smell of waste and took gulps from the needle-cold buckets of water that were shoved through the door by the screaming guards. Far below the tracks, a slow, shuddering groan whispered her name, over and over: yah-ell, ya-ell, ya-ell.”

Though I’m drawn in by these first few lines, I’m also sickened and saddened by them. And while whole premise of Hitler having had any victory is deeply disturbing, I’m bouyed by the hope that this young woman might yet best him. I love WWII fiction and I love strong female characters. I’ll keep reading.