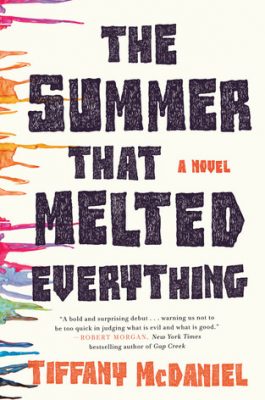 The Summer that Melted Everything by Tiffany McDaniel
on January 1st 1970
Pages: 310
Goodreads

Fielding Bliss has never forgotten the summer of 1984: the year a heat wave scorched Breathed, Ohio. The year he became friends with the devil.

Sal seems to appear out of nowhere - a bruised and tattered thirteen-year-old boy claiming to be the devil himself answering an invitation. Fielding Bliss, the son of a local prosecutor, brings him home where he's welcomed into the Bliss family, assuming he's a runaway from a nearby farm town.

When word spreads that the devil has come to Breathed, not everyone is happy to welcome this self-proclaimed fallen angel. Murmurs follow him and tensions rise, along with the temperature as an unbearable heat wave rolls into town right along with him. As strange accidents start to occur, riled by the feverish heat, some in the town start to believe that Sal is exactly who he claims to be. While the Bliss family wrestle with their own personal demons, a fanatic drives the town to the brink of a catastrophe that will change this sleepy Ohio backwater forever.

” “A snake that could harm you, you don’t have much choice to kill. You wouldn’t be able to leave a cobra in your sock drawer. But a snake that is no threat will greatly define the man who tries to kill it anyways.” “

The year is 1984 and in the small town of Breathed (pronounced breath-ed), Ohio, something strange is happening. Autopsy Bliss, a local attorney, places an open invitation in the newspaper inviting the devil to town. The arrival of a young boy, out of nowhere, claiming to be answering sets the stage for a series of events that will have the entire town coming undone.

The Summer that Melted Everything is a very emotional read. When I finished, I had a sense of hopeless heaviness in my chest that hasn’t fully dissipated. Tiffany McDaniel has boldly chosen to take on several serious social issues at once including racism, homophobia, HIV/AIDS, child abuse and molestation, mob mentality, and behavioral health differences for starters. So many issues, in fact, that had I realized just how many prior to reading the book, I may have scoffed at the level of ambition. Somehow, though, it all works in this book. In fact, it’s necessary, and I would argue that the the very point of this book is to illuminate how layers upon layers of social injustices, societal complicity and complacency, and the oppression of the marginalized have culminated/can culminate in the breakdown of the sense of safety and justice within a community large or small.

As if that wasn’t enough, McDaniel writes in poetic form that is a joy to read. So much so, in fact, that I wondered if she was a poet. As it turns out, she is! There are many beautiful passages throughout the book but here’s another of my favorites:

“The finale of fear is neared by small labors of bravery. These small labors will eventually lead to the last laboring of the great defeat of the fear altogether. That is the breathing text of hope anyways, that we branch an escape from fear’s trapping circle.”

As for young Sal, was he the devil? Or was he simply convinced that he was so? If so, why? I know my answers but I’ll leave you to decide for yourself.

The Summer that Melted Everything is a profoundly moving, heartbreaking read that will stay with you forever. Tiffany McDaniel brilliantly weaves a story that is classic man’s inhumanity to man meets modern literary fiction with twists of darkness and mystery.

I’d like to thank Amanda at Cover2CoverMom for connecting me with Tiffany McDaniel. I’d read Amanda’s review back when it was originally posted and it’s been on my want-to-read list since. I’m so grateful that I’ve finally been able to read this book.

This book would be a great Christmas gift for the serious lit lover on your list.

Many thanks to Tiffany McDaniel for providing me with a free copy of this book in exchange for an honest review.