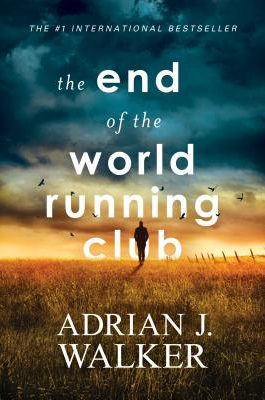 The End of the World Running Club by Adrian J. Walker
Published by Sourcebooks Landmark on September 5th 2017
Pages: 464
Goodreads

Perfect for fans of The Martian, this powerful post-apocalyptic thriller pits reluctant father Edgar Hill in a race against time to get back to his wife and children. When the sky begins to fall and he finds himself alone, his best hope is to run – or risk losing what he loves forever.

When the world ends and you find yourself forsaken, every second counts. No one knows this more than Edgar Hill. Stranded on the other side of the country from his wife and children, Ed must push himself across a devastated wasteland to get back to them. With the clock ticking and hundreds of miles between them, his best hope is to run -- or risk losing what he loves forever.

Today I’m going to share the first couple of Chapter of The End of the World Running Club by Adrian J. Walker. I received a signed ARC of this book at Book Expo 2016. It was pretty hyped as an international bestseller and I was really excited to read it. I somehow never reached for it though. Probably because I’ve only read a few dystopian novels that I’ve enjoyed and need to be in the right frame of mind to start one. While I’ve seen a few negative reviews, the majority of Goodreads reviews are four and five star.

“Beliefs are strange. Things of certainty about things uncertain. Take mine, for example. I believe there are graves in the fields next to the house where I live. I stop at the fence every morning and I look at three lashed crosses standing crooked against the sea, and I believe I know who is buried beneath them.

But I can’t be sure. So I believe instead. Is suppose I could dig them up, but as I see it, there are only two ways that little enterprise can end, and neither of them is particularly palatable. Besides, if you have to go around digging up graves to prove your own sanity then you’ve probably already lost it.”

So far, I’m liking this character’s voice. These first few chapters have made me even more eager to begin this book.