Throwback Thursday is a weekly meme hosted by Renee at It’s Book Talk. Throwback Thursday is an awesome opportunity to share old favorites as well as older books in our TBR. I love this idea as I only started blogging about two years ago. Therefore, I have lots of old favorites to talk about. While I may not remember all of the details needed to write a complete review, I’m happy to share the thoughts and impressions that have remained with me long after I finished the book.

Born to Run by Christopher McDougall 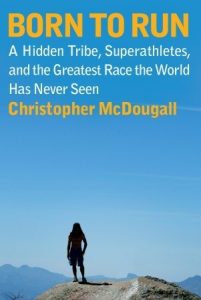 Full of incredible characters, amazing athletic achievements, cutting-edge science, and, most of all, pure inspiration, Born to Run is an epic adventure that began with one simple question: Why does my foot hurt? In search of an answer, Christopher McDougall sets off to find a tribe of the world’s greatest distance runners and learn their secrets, and in the process shows us that everything we thought we knew about running is wrong.

Isolated by the most savage terrain in North America, the reclusive Tarahumara Indians of Mexico’s deadly Copper Canyons are custodians of a lost art. For centuries they have practiced techniques that allow them to run hundreds of miles without rest and chase down anything from a deer to an Olympic marathoner while enjoying every mile of it. Their superhuman talent is matched by uncanny health and serenity, leaving the Tarahumara immune to the diseases and strife that plague modern existence. With the help of Caballo Blanco, a mysterious loner who lives among the tribe, the author was able not only to uncover the secrets of the Tarahumara but also to find his own inner ultra-athlete, as he trained for the challenge of a lifetime: a fifty-mile race through the heart of Tarahumara country pitting the tribe against an odd band of Americans, including a star ultramarathoner, a beautiful young surfer, and a barefoot wonder.

With a sharp wit and wild exuberance, McDougall takes us from the high-tech science labs at Harvard to the sun-baked valleys and freezing peaks across North America, where ever-growing numbers of ultrarunners are pushing their bodies to the limit, and, finally, to the climactic race in the Copper Canyons. Born to Run is that rare book that will not only engage your mind but inspire your body when you realize that the secret to happiness is right at your feet, and that you, indeed all of us, were born to run.

Have you ever seen people running or walking with those not-so-attractive Vibram Five Fingers? Well, this is the book that started the trend!

I first read Born to Run when it was newly published back in 2009. I’d just taken up running a couple of years earlier in an effort to prove to my new boyfriend (now husband) that I could absolutely never run a quarter of a mile. As it turned out, I could actually run a quarter of a mile. To my great shock, I could eventually run a mile. And then two. And even three! But I did have occasional foot and back back pain. As a nurse, the science-y stuff promised in the blurb appealed to me. I was alsointrigued by the what I was hearing about the Tarahumara. So, despite that fact that I’d never read a single sports-related book in my life, I decided to give it a go.

Born to Run was a super-fast read and was told in such a way that it felt more like fiction. The science is really a small but interesting part of it. I’m still absolutely fascinated by the Tarahumara and their ability to run such distances without struggle or injury. I have great respect for the Tarahumara and their ability to preserve their culture while being willing to share some of their secrets with the world. There is profound wisdom in keeping things simple and as they have always been. While we are racking up healthcare costs due to injuries and spending fortunes on the research and development of the latest running shoe, they are still running barefoot or with just a slip of leather tied to their feet and getting on just fine.

As for the Five Fingers, I bought a pair and ran happily in them for several years. I lost them and recently found them again during my move. I’ll probably try them again in the spring though I suspect it might be time for a new pair.