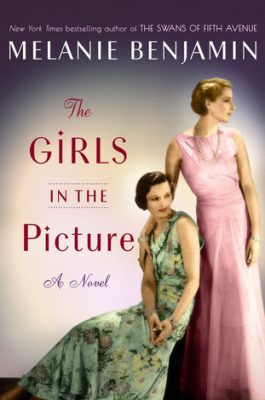 The Girls in the Picture by Melanie Benjamin
Published by Delacorte Press on January 16th 2018
Pages: 448
Goodreads

An intimate portrait of the close friendship and powerful creative partnership between two of Hollywood’s earliest female superstars: Frances Marion and Mary Pickford. An enchanting new novel from the New York Times bestselling author of The Swans of Fifth Avenue and The Aviator’s Wife.

Hollywood, 1914. Frances Marion, a young writer desperate for a break, meets “America’s Sweetheart,” Mary Pickford, already making a name for herself both on and off the screen with her golden curls and lively spirit. Together, these two women will take the movie business by storm.

Mary Pickford becomes known as the “Queen of the Movies”—the first actor to have her name on a movie marquee, and the first to become a truly international celebrity. Mary and her husband, Douglas Fairbanks, were America’s first Royal Couple, living in a home more famous that Buckingham Palace. Mary won the first Academy Award for Best Actress in a Talkie and was the first to put her hand and footprints in Grauman’s theater sidewalk. Her annual salary in 1919 was $625,000—at a time when women’s salaries peaked at $10 a week. Frances Marion is widely considered one of the most important female screenwriters of the 20th century, and was the first writer to win multiple Academy Awards. The close personal friendship between the two stars was closely linked to their professional collaboration and success.

I really enjoyed The Swans of Fifth Avenue and started getting excited about The Girls in the Picture as soon as it was announced. In fact, it was the book I was most excited about receiving at Book Expo 2017. Melanie Benjamin was as much a delight in person, at her in-booth signing, as she is on her social media accounts. She even allowed me to blather on about her kitchen reno (it looks fantastic) and her cats at some length without calling security.

As for the book, it did not disappoint. It’s very evident that the author did an enormous amount of research on Mary Pickford and Frances Marion, their families, lovers, husbands, and the movie industry itself. I was fascinated by the actual events leading to their rise to power in Hollywood.

The elements that made this book special, however, are the character development and the portrayal of the relationship between Mary and Frances. Melanie Benjamin has taken the historic information and weaved in a little imagination/magic, creating characters that are beyond multi-dimensional. They are as highly nuanced as their relationships with one another.

In reading The Girls in the Picture, I was constantly reminded of the sacrifice and struggles women have always had to make in order to get to the tops of their professions. Hollywood was certainly no exception, then or now. Their fast, glamorous, monied lives did not come at no cost.

This book is an excellent exploration of the friendships of strong women – admiration, respect, mutual dependency, jealousy, insecurity – it’s all here in a very real way. Though their friendship was tumultuous at time, I felt that their connection transcended the trivialities of the moment. The end of the book made me teary and reflective of some of my own friendships.

After reading these two latest novels, I’d definitely look forward to reading anything Melanie Benjamin writes in the future but I’d also love to read some of her previous works.

Many thanks to Delacorte Press for providing me with a free copy of this book in exchange for an honest review.