Throwback Thursday is a weekly meme hosted by Renee at It’s Book Talk. Throwback Thursday is an awesome opportunity to share old favorites as well as older books in our TBR. I love this idea as I only started blogging about two years ago. Therefore, I have lots of old favorites to talk about. While I may not remember all of the details needed to write a complete review, I’m happy to share the thoughts and impressions that have remained with me long after I finished the book. 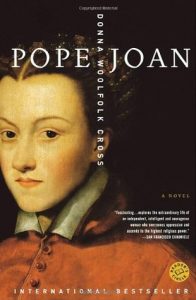 For a thousand years her existence has been denied. She is the legend that will not die–Pope Joan, the ninth-century woman who disguised herself as a man and rose to become the only female ever to sit on the throne of St. Peter. Now in this riveting novel, Donna Woolfolk Cross paints a sweeping portrait of an unforgettable heroine who struggles against restrictions her soul cannot accept.

Brilliant and talented, young Joan rebels against medieval social strictures forbidding women to learn. When her brother is brutally killed during a Viking attack, Joan takes up his cloak–and his identity–and enters the monastery of Fulda. As Brother John Anglicus, Joan distinguishes herself as a great scholar and healer. Eventually, she is drawn to Rome, where she becomes enmeshed in a dangerous web of love, passion, and politics. Triumphing over appalling odds, she finally attains the highest office in Christendom–wielding a power greater than any woman before or since. But such power always comes at a price . . .

In this international bestseller, Cross brings the Dark Ages to life in all their brutal splendor and shares the dramatic story of a woman whose strength of vision led her to defy the social restrictions of her day.

Pope Joan is one of my all-time favorite book club reads. If you like historical fiction with strong female characters, this is one you don’t want to miss. I’m not sure I would have picked it up on my own as I don’t tend to gravitate toward books set in Rome during that era. I find they can be full of gratuitous bloodshed and require you to memorize the names of approximately one thousand warriors. This was not the case with Pope Joan, however. I was hooked from the beginning!

Sadly, this seems to be the only published novel by Donna Woolfolk Cross. Her website indicates that it took her seven years to research this novel so I’m still holding out hope that she’ll write another.