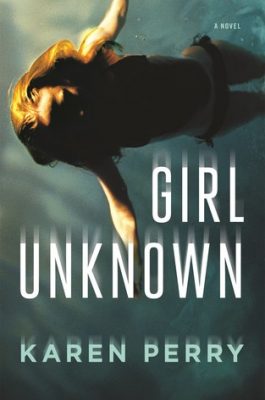 When first-year student Zoë Barry walks into Professor David Connolly's office and tentatively says these words, he is left reeling. But it is the lives of his family - particularly his wife Caroline - which are turned upside down by the arrival of this stranger.

Though no one knows quite who Zoë is, she is soon entangled in their lives. Yet her stories don't ring true and Caroline is determined to learn if the girl is the unlucky innocent she claims to be or someone with a far darker agenda.

A deadly cuckoo in the nest . . .Because by letting Zoë in, David and Caroline aren't just leaving themselves vulnerable. They're risking the most precious thing in the world - the lives of their children . . .

'Both as a crime novel and as an emotional journey, it's gripping stuff' Tana French

Welcome to my stop on the blog tour for Girl Unknown! This book is unique in many ways. The first is that Karen Perry is actually a pen name for two writers collaborating on this book. This is the first book, to the best of my knowledge, that I’ve read penned by two authors and it definitely worked here.

Most of the book is told in the alternating first person points of view of Caroline and David. They’re a long-married couple who have seen their share of marital difficulties but are currently cruising through a pretty good life in a relatively quiet and stable manner. Until SHE arrives. She being Zoe, a young blonde student of David’s who claims to be his daughter from a relationship predating his marriage.

Straightaway, the reader gets the impression that something is not quite right with this young woman. Is she his daughter? Is she a psychopath? Is she both? Is she neither? So even though I thought I knew where this was going (I didn’t), I couldn’t turn the pages fast enough to find out. A+ in the pacing department!

With regard to the characters, I spent approximately 90% of the book wanting to beat David about the head. (Metaphorically speaking of course. I am not the violent type.) I don’t often feel the compulsion to scream at a character in a book but I made an exception for David. Caroline was more likable though I can’t say that I felt a deep affinity for her. I will withhold comments on Zoe so as not to influence anyone before they’ve read the book.

Girl Unknown really stood out for its representation of relationships. I’m not one for any romantic nonsense but I was totally on board with the way Caroline and David’s marriage was portrayed. I found it to be very authentic in a way that must be difficult to accomplish. Their relationships with their other children, Robbie and Holly were also very realistic. I wonder if this is the product of this book having this book written by two writers – one male and one female. It many or may not – whatever it is, it worked – but I don’t often feel about the way husband/wife relationships are depicted.

The plot provided lots of suspense throughout with several unexpected twists and turns right till the end.

Many thanks to Henry Holt for providing me with a free copy of this book in exchange for an honest review.