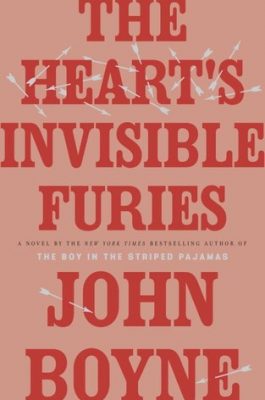 Cyril Avery is not a real Avery or at least that’s what his adoptive parents tell him. And he never will be. But if he isn’t a real Avery, then who is he?

Born out of wedlock to a teenage girl cast out from her rural Irish community and adopted by a well-to-do if eccentric Dublin couple via the intervention of a hunchbacked Redemptorist nun, Cyril is adrift in the world, anchored only tenuously by his heartfelt friendship with the infinitely more glamourous and dangerous Julian Woodbead.

At the mercy of fortune and coincidence, he will spend a lifetime coming to know himself and where he came from – and over his three score years and ten, will struggle to discover an identity, a home, a country and much more.

In this, Boyne's most transcendent work to date, we are shown the story of Ireland from the 1940s to today through the eyes of one ordinary man. The Heart's Invisible Furies is a novel to make you laugh and cry while reminding us all of the redemptive power of the human spirit.

I knew I had to read The Heart’s Invisible Furies when I saw it on so many “Best of 2017” lists. The endorsement of several of my favorite bloggers who often have tastes similar to my was enough to convince me to insert this 582 page book smack into the middle of my already jam-packed reading schedule. A few of those include Renee at It’s Book Talk, Sarah at Sarah’s Book Shelves, and Susie at Novel Visits. I’m happy say I do not regret for one moment the fews days following that I felt compelled to read and review an entire book in the same day just to stay on schedule. This book proved to be one of the best, if not THE best that I’ve ever read.

In addition to the above, there are many reviews out there so I’m going to focus mostly on my experience with the book and what I felt were the highlights. I agree with the sentiments of so many others in repeating that the story was rich, unique, beautifully written and full of well-drawn characters to love (or not). Even in the lightest moments in this book, there was a heaviness in my heart that may have dissipated but never completely went away.

The Heart’s Invisible Furies if full of heartbreak, longing, and even humor – one of the most emotive books I’ve ever read. From the very beginning, where Cyril’s unwed, teenage mother is cast out of her church and her home, I was so drawn in that I never wanted to put this book down. It was a page-turner for sure, but not for the reasons one would normally think. Rather than flipping through at the edge of my seat because I couldn’t wait to see what happens next, I found myself simply unable to leave Cyril. I felt very connected to his character.  I needed to see him through.

This book takes a hard look at many social issues from what is, at best the intolerance of and at worst, the abuse of power of the Catholic Church in Ireland to the HIV/AIDS crisis in 1980’s New York City. The unbelievable difficulty/impossibility of living openly as a gay man in Ireland in times considered “modern” where one of the things I found most heartbreaking.

The Heart’s Invisible Furies could also be primer on how to write all manner of highly nuanced family dynamics. There are too many examples to name but I was most struck by the complete rejection faced by many of the characters due to pretty much anything having to do with sex – if you had it, if you were thinking about having it, if you wanted to have it with the “wrong sort” of person, even if you were abused, you faced immeasurable pain and rejection from the very people you depended on most for love and support. The weight of shame was crushing. I’m gutted to think that in many parts of the world, including here in the U.S., there are still people who are unable to live openly without fear of rejection and violence.

I was amazed at the way John Boyne was able to weave together historically accurate renderings of the times with a series of unlikely events and coincidences in a way that felt absolutely authentic. Not once did I scoff at any of the improbabilities in the story. This, for me, is one of the hallmarks of a true classic.

Prior to having read The Heart’s Invisible Furies, the only book I’d read by John Boyne was The House of Special Purpose which I can also recommend. I’m now keen to read The Boy in the Striped Pajamas. I can’t wait to see what he comes out with next.

Like Loading...
« First Chapter/First Paragraph: The Naturalist by Andrew Mayne
Review: The Wife Between Us by Greer Hendricks and Sarah Pekkanen »