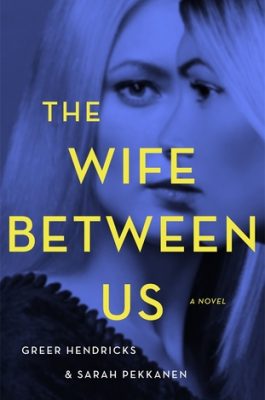 The Wife Between Us by Greer Hendricks, Sarah Pekkanen
Published by St. Martin's Press on January 9th 2018
Pages: 352
Goodreads

Discover the next blockbuster novel of suspense, and get ready for the read of your life.

THE WIFE BETWEEN US is the debut novel of co-authors Greer Hendricks and Sarah Pekkanen. Hendricks, a former book editor with a major New York publishing house, lives in Manhattan with her family. Pekkanen, the author of seven bestselling solo novels, lives in Maryland with her three sons. THE WIFE BETWEEN US has been sold in 30 countries and optioned for film by Steven Spielberg's Amblin Partners. It is a Book of the Month Club Pick, an Amazon Best Book of the Month, and an Indie Next Pick. Hendricks and Pekkanen are currently at work on their next novel, also a psychological thriller.

As my Aunt Betty would have said, “HOLY MARY, MOTHER O’ GOD!” Just when I thought I understood what was going on, along came Part 2 and I’m begging for confirmation that my head is spinning in the right direction.

The Wife Between Us was exactly what I needed to get me out of my two-book DNF reading slump. It started out a bit slowly which concerned me for the first few chapters but I now understand the need for the build. It’s necessity to the plot is only one consideration; if my fingers turned those first 75 or so pages as quickly as they’s turned the rest, they’d have been blistered and bleeding!

We’ve all read our share of garden variety, love triangle-based domestic noirs. This is not that! Greer Hendricks and Sarah Pekkanen have come up with a truly unique plot and a cast of characters that will have you questioning everything you think you know about them until the very end. Even when I reached the point of the fist big reveal, I still had no idea where we going or more accurately, why. Is this a book about a woman who’s determined to sabotage her husband’s new relationship out of pure jealousy? Fair enough if it is. But is there more? How much of our unreliable narrator’s tale can be believed?

I won’t go into the plot beyond what I’ve already said; it’s unique. To discuss even basic elements of plot and characters would only lead us down a path of spoilers. I cannot be responsible for depriving readers of the shocking and twisted ride that is The Wife Between Us.

When I learned that this book already has a movie deal, I was only somewhat surprised. It’s NYC and Westchester settings and atmospheric restaurant and party scenes will translate beautifully to film. I’ve been trying to cast the actors in my head but not coming up with what I think are “the ones”. If you’ve read the book, I’d love to hear your thoughts on this in the comments.

Many thanks to St. Martin’s Press for providing me with a free copy of this book in exchange for an honest review.