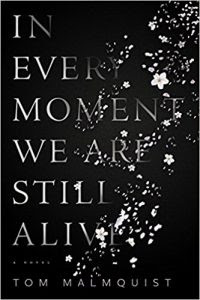 In Every Moment We Are Still Alive by Tom Malmquist
Published by Melville House on February 6th 2018
Pages: 288
Goodreads

A prize-winning, bestselling debut of love, loss, and family—based on a true story—that’s winning readers around the world.

When Tom’s heavily pregnant girlfriend Karin is rushed to the hospital, doctors are able to save the baby. But they are helpless to save Karin from what turns out to be acute Leukemia. And in a cruel, fleeting moment Tom gains a daughter but loses his soul-mate. In Every Moment We Are Alive is the story of the year that changes everything, as Tom must reconcile the fury and pain of loss with the overwhelming responsibility of raising his daughter, Livia, alone.

By turns tragic and redemptive, meditative and breathless, achingly poignant and darkly funny, this autobiographical novel has been described as ’hypnotic’, ’impossible to resist’ and ’one of the most powerful books about grief ever written’.

“On the middle shelf in the bathroom cabinet lies Karin’s hairbrush. Her hairs are still snagged in its plastic teeth. She didn’t have time to prise them out and throw them away as she usually did. The brush is thick with hair, I smell it, I press it to my mouth.”

In Every Moment We Are Still Alive is full of beautiful, poignant passages. Tom Malmquist’s grief upon suddenly losing his wife shortly after the birth of their child is profound and palpable.

The book takes us on a journey of the days and months after Karin’s death while alternating with the months and years preceding it. The reader is given an intimate look into Tom and Karin’s relationships with one another and their families. We are given a glimpse into the reality that grieving family members often face. Tom is simultaneously dealing with caring for a newborn, making funeral arrangements, and dealing with bureaucratic red tape of having himself appointed as baby Livia’s legal guardian. (Apparently, in Sweden, the latter was necessary because Karin and Tom where not married. This was still true despite the fact that a DNA test performed while Livia was still in the hospital confirmed his paternity.) Sadly, shortly after Karin’s death, Tom’s father, who has been battling cancer for ten years, becomes gravely ill and dies.

While there was much to love and appreciate about this book, I found its formatting made it quite difficult to get through. There are no quotation marks which is enough to distract me but worse, there was no line break in conversation. There are pages – sometimes three or four at a time – that have not a single line break and alternate between dialog and narrative. The toggle between past and present was not always clear to me and I found myself needing to reread several paragraphs. Unfortunately, I was unable to adjust to this writing style and it had a significant impact on my overall experience in reading this book.

In Every Moment We are Still Alive will be a good fit for readers who are looking for a meaningful, poignant read who will not become distracted by the nontraditional writing style.

Thanks to Melville House and TLC Book Tours for proving me with a free copy of this book in exchange for an honest review.