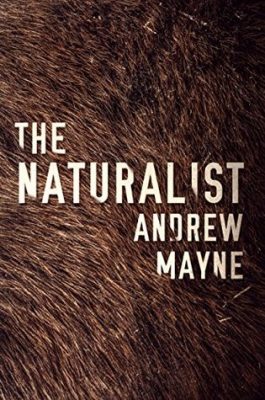 Professor Theo Cray is trained to see patterns where others see chaos. So when mutilated bodies found deep in the Montana woods leave the cops searching blindly for clues, Theo sees something they missed. Something unnatural. Something only he can stop.

As a computational biologist, Theo is more familiar with digital code and microbes than the dark arts of forensic sleuthing. But a field trip to Montana suddenly lands him in the middle of an investigation into the bloody killing of one of his former students. As more details, and bodies, come to light, the local cops determine that the killer is either a grizzly gone rogue…or Theo himself. Racing to stay one step ahead of the police, Theo must use his scientific acumen to uncover the killer. Will he be able to become as cunning as the predator he hunts—before he becomes its prey?

There are so many things I loved about The Naturalist! First, there’s our main man, Professor Theo Cray. He’s a computational biologist. So basically he’s a little nerdy, very smart, and, because he’s now been drawn in to a murder investigation, a bit of a rogue Magnum, P.I. I’m not one for bookish crushes but if I were, he’d be a candidate.

Next, there’s the plot. What starts out as one dead woman, who happens to be a former student of Theo’s, turns into multiple dead bodies. The crime scenes are gruesome. The victims appear to have been slashed to death by bear, mountain lion, or something else that’s not quite human. The police are frustratingly unwilling to listen to Theo’s opinions regarding who or what may have killed all of these women. This forces Theo to strike out on his on own quest for the killer. His scientific knowledge lends an element that I’ve rarely read in this genre. He uses biology, anthropology, botany, statistics, and computer algorithms together in order to locate the bodies and predict where more may be located.

As far as pacing goes, I found The Naturalist to be an absolute page-turner. I read it in one day. I loved that the chapters are short and the action moves along steadily.

I did have a couple of small issues with the book. The first is relatively minor. I found Theo’s grief over the former student who had been killed to be greater than I would have expected. That may seem insensitive but they’d only had a professional relationship and they hadn’t spoken in years. The second – and you know I’m a stickler for this – is plausibility. Particularly as it relates to the ending. I won’t give it away because it was quite imaginative but, as a nurse, I must admit I rolled my eyes more than once. I actually think the final scene would translate very well in film but it just seemed a bit too much as I read it on the pages. In my opinion, this is a classic case of an author’s brilliant imagination being both a blessing and a curse. Had the ending been dialed back a bit, I’m sure I could have given this book four to four and a half stars.

This is the first book in The Naturalist series. I am very much looking forward to reading the next book.

Many thanks to Thomas & Mercer for providing me with a free copy of this book in exchange for an honest review.