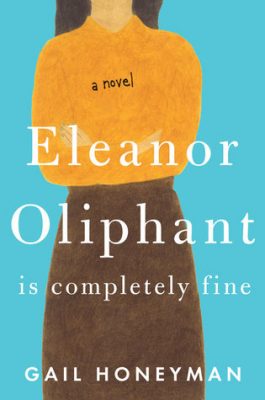 DING! DING! DING! We have a WINNER! Eleanor Oliphant is Completely Fine will undoubtedly be my favorite read this month. I’m sure this book will also be on my Top Ten Read in 2018 list.

Eleanor was, at first, a bit hard to like. She was a bit judgey, aloof, and condescending. Her week revolved around work and her Wednesday evening chats with Mummy. Her weekends were spent in the company of her potted plant, Polly, and one or three bottles of vodka. We soon learn, however, that there is likely a reason that Eleanor is the way she is. Among other things, Eleanor has a large scar on one side of her cheek as the result of “an incident” in her childhood. This incident has resulted in Mummy being “inaccessible”, hence their only contact being their weekly chats.

When Eleanor experiences IT trouble one day at work, she is forced to contact Raymond, the new IT person, to solve her computer issues. She finds his lack of immediate response, overall appearance, and cigarette oder to be quite off-putting. When she and Raymond are coincidentally leaving the office together one day, they witness an older man collapsing in front of them. Raymond is quick to help but Eleanor must be guilted in to providing aid. So begins her reluctant connection to Raymond and Sammy, the man on the sidewalk. She is somewhat motivated to be cordial to Raymond, though, as she is in need of some IT assistance at home. You see, she has met someone and wishes to do some internet research. And by “met someone”, we mean that she has seen a guy singing in a band who she is now a bit obsessed with.

Eleanor’s obsession with Johnnie motivates her to make some changes to her wardrobe an appearance. Her shopping and beautification efforts provided me with more than a few giggles.

In the meantime, Eleanor’s unlikely friendships with Raymond and and Sammy deepen and provides us with glimpses of another side to Eleanor’s personality which is quite lovely. She is, indeed, capable of caring for other people. She is quite obviously lonely. As much as she is averse to touch and intimacy, she also craves it. It becomes obvious that Eleanor’s scars are emotional as well.

I absolutely adored Raymond! He was — cigarette stench and perpetual wearing of trainers excepted — the perfect friend for Eleanor. We should all have a rock like that in our lives; someone to accept us unconditionally and be a soft cushion on which to land in times of trouble.

As the story evolves and continues, we learn more about “the incident” and Eleanor’s struggle to heal, to defeat her demons, and live a more fulfilling life. By the middle of the book, I was absolutely rooting for Eleanor and found it difficult to stop listening.

This book does address some serious topics including PTSD, alcoholism, suicide, and child abuse. And though there were moments that I felt a little burdened by the weight of it, I found that it was written with sensitivity. There was nothing terribly explicit that I can recall and I never found it to be over the top or gratuitous. It was all very necessary to Eleanor’s story. Anyone who’s had a toxic parental relationship will relate to all aspects of Eleanor’s conversations with Mummy; from the beginning of the book to the very end. All this said, I found Eleanor Oliphant is Completely Fine to be an overwhelmingly positive and uplifting read.

I’m in awe of the fact that this is Gail Honeyman’s debut novel. She clearly has a very keen sense of the depths and nuances of human emotion. She writes in a way that is substantive while being simultaneously witty and humorous. I can’t wait to see what she comes out with next.

I chose Eleanor Oliphant is Completely Fine as my first audiobook. Though I found that I can’t multitask with listening, I really enjoyed it. I found that when I was tired, it was much easier to listen that it would have been to read. The narrator, Cathleen McCarron was the perfect voice for Eleanor. I loved how she gave Raymond his voice as well.