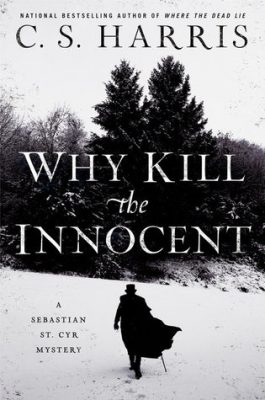 In the newest mystery from the national bestselling author of Where the Dead Lie, a brutal murder draws Sebastian St. Cyr into the web of the royal court, where intrigue abounds and betrayal awaits.

London, 1814. As a cruel winter holds the city in its icy grip, the bloody body of a beautiful young musician is found half-buried in a snowdrift. Jane Ambrose's ties to Princess Charlotte, the only child of the Prince Regent and heir presumptive to the throne, panic the palace, which moves quickly to shut down any investigation into the death of the talented pianist. But Sebastian St. Cyr, Viscount Devlin, and his wife Hero refuse to allow Jane's murderer to escape justice.

Untangling the secrets of Jane's world leads Sebastian into a maze of dangerous treachery where each player has his or her own unsavory agenda and no one can be trusted. As the Thames freezes over and the people of London pour onto the ice for a Frost Fair, Sebastian and Hero find their investigation circling back to the palace and building to a chilling crescendo of deceit and death . . .

Welcome to my stop on the blog tour for Why Kill the Innocent by C.S. Harris! Though I hadn’t read any of the earlier books in this series, I was so drawn in by the cover and the blurb that I couldn’t resist. There were a few obvious references to events that happened earlier in the series but I had no trouble reading this one as a stand-alone.

Though the book is set in 1800’s London (a location and era combo I love!), the dynamic between Hero and Devlin, our dynamic sleuths, is refreshingly modern. I love relationship drama as much as the next reader but it was a nice change of pace to read about a husband and wife who actually like and respect one another. For better or worse, however, not all of the marriages in this book were quite as happy…

Enter the victim, Jane Ambrose. As luck would have it, Hero literally stumbles upon her body concealed in the heavy snow in the unforgiving winter of 1814. What in the world was Princess Charlotte’s piano teacher doing in this part of town? And why ever would someone want her dead? Could it have been her  seemingly loving husband? Could she have overheard something she oughtn’t have? Or has she been keeping secrets of her own?

I realize that murder mysteries are not normally considered fun, but that’s the only word I can think of to describe the way in which the reader is bounced around from one suspect to the other. Each time one suspect is interviewed, another bomb is dropped and the finger is pointed at yet another suspect. Remember pinball? It was like that. In a good way.

The lack of opportunity for women during this period of time was central theme in this book. C.S. Harris did a brilliant job of weaving in several examples of the various ways in which women were oppressed. I won’t go into detail as some are relevant to the plot but I thought this, along with the great deal of research the author obviously did on this book, did a lot to elevate the book from a simple mystery to more of a literary/historical or “smart” mystery. I really enjoyed learning about The Frost Fair and the plight of Princess Charlotte. The author added a very detailed note at the end of the book which was very informative and interesting.

In summary, Why Kill the Innocent was a delightful classic whodunnit with a smart sensability. Though I’m not generally a series reader, I would definitely read more books in this series. I also think this series could make for great TV.

Don’t for get to check out my Instagram page for a change to win a copy of Why Kill the Innocent.

Many thanks to Berkley for providing me with a free copy of this book in exchange for an honest review.