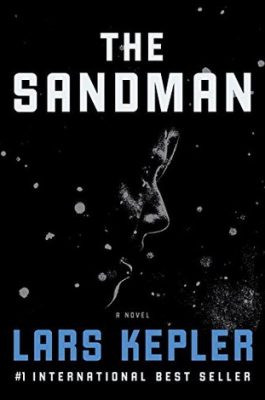 Despite never having read Lars Kepler’s previous novels, I had high hopes for The Sandman. In the end, it simply didn’t live up to my expectations. That’s not say it was all bad but the issues I had, which I hope I can articulate, were pretty weighty ones and really impacted my overall experience with the book.

Perhaps one of the reasons that I was so disappointed is because this book had such potential. I love a good serial killer thriller as much as anyone can. Add a man found wandering in the freezing, snowy Swedish landscape who turns out to be a young boy kidnapped thirteen years ago and I’m hooked! Lars Kepler even takes it to the next level with a fair amount of gore and depravation. The chapters are kept short and sweet. It’s definitely one of those just-one-more chapter books. The characters are straightforward with just the right amount of depth for Nordic Noir.

So where did it all go wrong?

I found there to be a great deal of unrealistic/unbelievable events. Unfortunately, I can’t come up with any direct examples that wouldn’t include spoilers. Some had to do with interactions (or lack thereof) between Jurek Walter and prison staff. Others involved things ranging from improbable coincidences to highly unlikely medical scenarios. I know some or even many of these things wouldn’t bother many readers but I had a difficult time seeing past their cumulative effect .

The most difficulty I had with The Sandman was the ending. Until the ending, I had anticipated rating this book 3.5 to 4 stars. In addition to generally not liking the ending in terms of plot and plausibility, I found that it dragged on. I’m not a fan of books or movies in which your left thinking it’s over three or four times before it’s actually over. Fans of action adventure books and movies, however, may love this ending.

Though I am unlikely to return to the Joona Linna series, most of the book was enjoyable enough that I would consider, while proceeding with caution, reading Lars Kepler again in the future.

**I think it bears mentioning that there’s a fair amount of violence, both physical (what I would call one notch above normal thriller violence) and sexual in this book.**