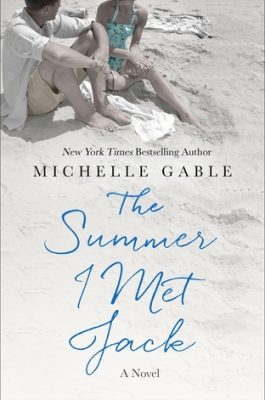 The Summer I Met Jack by Michelle Gable
Published by St. Martin's Press on May 29th 2018
Pages: 515
Goodreads

New York Times bestselling author imagines the affair between JFK and Alicia Corning Clark - and the child they may have had.

Based on a real story - in 1950, a young, beautiful Polish refugee arrives in Hyannisport, Massachusetts to work as a maid for one of the wealthiest families in America. Alicia is at once dazzled by the large and charismatic family, in particular the oldest son, a rising politician named Jack.

Alicia and Jack are soon engaged, but his domineering father forbids the marriage. And so, Alicia trades Hyannisport for Hollywood, and eventually Rome. She dates famous actors and athletes and royalty, including Gary Cooper, Kirk Douglas, and Katharine Hepburn, all the while staying close with Jack. A decade after they meet, on the eve of Jack’s inauguration as the thirty-fifth President of the United States, the two must confront what they mean to each other.

The Summer I Met Jack is based on the fascinating real life of Alicia Corning Clark, a woman who J. Edgar Hoover insisted was paid by the Kennedys to keep quiet, not only about her romance with Jack Kennedy, but also a baby they may have had together.

When I first heard about this book, I was very excited because I had read Michelle Gable’s I’ll See you in Paris and already knew I liked her writing. Like many Americans, I’ve always been drawn to glamour and glitz as well as the drama and tragedy of the Kennedy family. I somehow had it in my head that this was going to be a very Kennedy-centric book detailing one of his many affairs. I was pleasantly surprised that this book was much more than that.

The Summer I Met Jack is the fascinating story of how a young woman, a “displaced person” from Poland, rose from Kennedy cleaning lady to almost-first-lady and Hollywood fame. As you might imagine, it didn’t happen easily. How the story of Alicia Darr never came to my attention is now beyond my comprehension. She was a fascinating woman in her own right and I’m glad her story has been told in this novel.

Alicia was a very a complex character. I’m not sure that I found her to be 100% likable but I did, for the most part, respect her. She was a bit of what some might call a climber but, let’s face it, options for women with ambition and no formal education or family to stand behind were limited in the 1950’s. I empathized with her situation. She was able to transition from a naive young woman to a wealthy, sophisticated socialite. Certainly Jack played a role in all that but, after reading the book, I have mixed feelings about exactly what that was. He certainly helped her make connections that advanced her career. But at what cost to her personal life? She certainly had a very interesting history with men post-Jack.

As for Jack, I learned a fair about him that I didn’t know as well. And while it’s perhaps a bit naive of me, I was surprised and frustrated to learn the extent of his family’s meddling. They may have changed the very course of history for Jack and our country.

It’s very apparent from the text and the author’s notes that a tremendous amount of research went into this book. I was inspired to do some googling on my own and enjoyed reading even more about Alicia and her remarkable life.

The Summer I Met Jack was a very compelling read. The second half flew by even faster than the first. This book is a great beach read for anyone who prefers a page-turner with just the right amount of substance.

Please visit my Instagram page to enter the giveaway!

Thanks to St. Martin’s Press for providing me with a free copy of this book in exchange for an honest review.

Like Loading...
« Mini Audiobook Review: Far From the Tree by Robin Benway
Music Monday: Let Me Clear My Throat by DJ Cool »