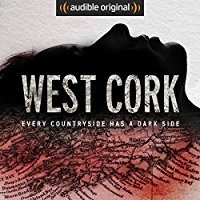 This much we do know: Sophie Toscan du Plantier was murdered days before Christmas in 1996, her broken body discovered at the edge of her property near the town of Schull in West Cork, Ireland. The rest remains a mystery.

Gripping, yet ever elusive, join the real-life hunt for answers in the year’s first not-to-be-missed, true-crime series. Investigative journalist, Sam Bungey, and documentarian, Jennifer Forde, guide listeners through the brutal, unsolved murder and the tangled web of its investigation, while introducing an intricate cast of characters, a provocative prime suspect, and a recovering community whose story begs to be heard.

I seem to be on quite a roll when it comes to audiobooks lately. I’m beginning to know straightaway if it’s going to work or not. One of the things I love about Audible is that if it isn’t, I can exchange the book, free of charge, for another. Fortunately, I haven’t had to do that in a while. West Cork is my third five-star audiobook in a row.

I first heard about this book while standing in one of the many, many, many looooong lines I stood in at Book Expo. I happened to be standing next to a young man who works for Audible and we started chatting about audiobooks. I mentioned that I’d just heard some great things about West Cork and that I was considering using one of my subscription credits to listen to it. I must’ve skimmed over the synopsis because I was under the impression that it was a work of fiction. He explained that it was nonfiction and that I should think of it as a series of podcast episodes presented by the investigative journalists who sought answers to questions surrounding the unsolved murder of a young woman in a remote Irish seaside town. Though I don’t read a lot of nonfiction, I do watch a lot of true crime on Investigation Discovery. That, coupled with the young man’s (I wish I could remember his name. I’m just awful with names.) genuine enthusiasm for the story, the journalists, and the atmosphere of West Cork motivated me to give it a go.

West Cork is the story of the unsolved murder of Sophie Tuscan du Plantier and how it affected the peaceful town of West Cork, Ireland. It has all the hallmarks of a great thriller—a beautiful, wealthy, and mysterious victim, a brutal crime scene, questionable investigative practices, and a suspect who is either the most wrongly accused man who ever was or a narcissistic murderer who loves bringing attention upon himself. The townspeople provided a unique cast of characters as you might expect in any small, close-knit towns all over the globe. Nosy neighbors, surly pub-goes, artsy types—none wanted to believe that this heinous killing could have been committed by one of their own. It would have been preferable to have found it had been carried out by one of the blow-ins—the name given to people who appeared to come from nowhere to settle in West Cork for the benefit of isolation and anonymity.

I was fascinated by the forensics which were somewhat limited by the techniques available in 1996, the local Gardaí’s knowledge of how to employ them, and the remote location of the murder. The ensuing investigation and various court proceeds held my attention and made me long for the resolution that would have been possible had this been a work of fiction.

In many ways listening to West Cork felt like watching a show on ID. Sam Bungey and Jennifer Forde were excellent narrators and I loved listening to them conduct interviews and informal chats with all of the interested parties including Ms. du Plantier’s family members, the suspect, the townspeople, and even the Gardaí. I was quite impressed with the access they’d been given. It speaks to their level of credibilty and what appears to be their genuine drive to help solve this murder.

I absolutely loved the soundtrack. I would’ve never imagined it could have such an effect on my experience. It provided an edge-of-the-seat sense of urgency and yet was beautiful at the same time. And it definitely helped boost the creepy factor as I was listening while running on quiet, rural roads…

I would definitely recommend West Cork to anyone who loves true crime or mystery/thriller fiction. I hope that Mr. Bungey and Ms. Forde go on to produce similar works in the future as I’d certainly love to give a listen.

****In celebration of this being my third consecutive 5-star Audible book, I’m running a giveaway on my Instagram account for a 3 month Audible subscription. Check it out here****