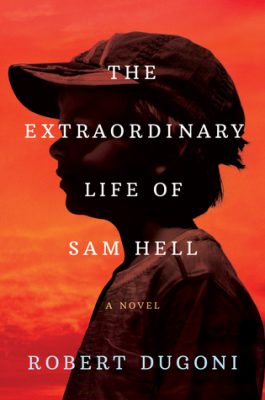 The Extraordinary Life of Sam Hell: A Novel by Robert Dugoni
on April 24th 2018
Goodreads

Wall Street Journal and New York Times bestselling author Robert Dugoni’s coming-of-age story is, according to Booklist, “a novel that, if it doesn’t cross entirely over into John Irving territory, certainly nestles in close to the border.”

Sam Hill always saw the world through different eyes. Born with red pupils, he was called “Devil Boy” or Sam “Hell” by his classmates; “God’s will” is what his mother called his ocular albinism. Her words were of little comfort, but Sam persevered, buoyed by his mother’s devout faith, his father’s practical wisdom, and his two other misfit friends.

Sam believed it was God who sent Ernie Cantwell, the only African American kid in his class, to be the friend he so desperately needed. And that it was God’s idea for Mickie Kennedy to storm into Our Lady of Mercy like a tornado, uprooting every rule Sam had been taught about boys and girls.

Forty years later, Sam, a small-town eye doctor, is no longer certain anything was by design—especially not the tragedy that caused him to turn his back on his friends, his hometown, and the life he’d always known. Running from the pain, eyes closed, served little purpose. Now, as he looks back on his life, Sam embarks on a journey that will take him halfway around the world. This time, his eyes are wide open—bringing into clear view what changed him, defined him, and made him so afraid, until he can finally see what truly matters.

I’m beginning to learn that audiobooks either work or do not for me. There is no middle ground. I’m happy to report that The Extraordinary Life of Sam Hell definitely worked!

There are many things I loved about this book but my overwhelming response upon finishing it was Wow, this book was so refreshing! I can’t recall the last time I read a book centered around a likable protagonist with an amazing and supportive family. That’s not to say that there wasn’t plenty of adversity. To be sure, there was. In fact, this book covered a great many weighty topics including bullying, racism, domestic abuse, and child abuse. These topics were addressed, however, with sensitivity and in such a way as to convey hope and a sense of justice in most cases.

As for the characters, Robert Dugoni does an amazing job of presenting us with a carefully constructed cast spanning the spectrum between good/almost perfect and pretty darn evil. What really stuck with me is how he managed to give us an understanding of how even the most unlikable characters became the way they are without excusing their behavior. Sam’s friends Mickey and Ernie were quite lovable and a beautiful reminder that our circle does not need to be large to be full. As for his parents, I can only say that everyone should have parents like Sam’s.

Another refreshing and interesting aspect of this book was the role of religion. Sam’s mother is a devout, walk-the-walk Catholic who isn’t afraid to go toe-to-toe with the intimidating Sister Beatrice at Our Lady of Mercy. I loved her for that. She was decidedly not, as his father would have called it, a “Christmas Catholic”. She was the real deal. While the church was not made out to be perfect, neither were it’s faults gratuitously sensationalized. I found Sam’s struggle with his religious beliefs to be very realistic. And while religion plays a role in the book, it’s never, ever preachy.

Overall, I loved The Extraordinary Life of Sam Hell. The audiobook was performed by the author and he did a fabulous job bringing the characters and story to life. In fact, I’m rather glad I listened to this one. I think I may have had an even better experience than if I’d read it. I haven’t read Robert Dugoni’s Tracy Crosswhite series but I would definitely read his work in the future.