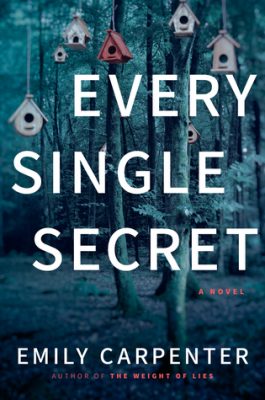 Every Single Secret by Emily Carpenter
Published by Lake Union Publishing on May 1st 2018
Pages: 307
Goodreads

“Every Single Secret takes you on a journey into a dark, surreal world…A true psychological thriller that will leave you breathless.” —Wendy Walker, bestselling author of All Is Not Forgotten and Emma in the Night

Emotionally guarded Daphne Amos always believed she’d found a kindred spirit in her fiancé, Heath. Both very private people, they’ve kept their pasts hidden from the world, and each other, until Heath’s escalating nightmares begin to put an undeniable strain on their relationship. Determined to give their impending marriage the best chance of succeeding, Heath insists that Daphne join him on a seven-day retreat with Dr. Matthew Cerny, a psychologist celebrated for getting to the root of repressed memories. Daphne reluctantly agrees—even though the past is the last place she wants to go.

The retreat’s isolated and forbidding location increases her unease, as do the doctor’s rules: they must relinquish their keys and phones, they’ll be monitored at all hours by hidden cameras, and they’re never to socialize with the other guests.

One sleepless night, Daphne decides to leave her room…and only then does she realize that the institute is not at all what it seems—and that whatever’s crying out from Heath’s past isn’t meant to be heard. It’s meant to be silenced.

Straight out of the shoot, I knew I was going to like this one. I immediately questioned the reliability of the narrator and I was intrigued by the secrets Daphne and Heath were keeping from one another. What engaged couple agrees to never bring up their past? Not just their relationship past, but ever-y-thing. Living for the present is one thing, but if your finance is telling you they don’t want to talk about anything in their past, you might want to consider that a red flag.

I loved Emily Carpenter’s writing. Alternating chapters in such a condensed timeline can be tricky but she did it in a way that really made the book unputdownable. The first person voice of Daphne was both easy to read and sophisticated.

Every Single Secret is everything a great psychological thriller should be. It’s an atmospheric, page-turning, dark, and twisty tale. The characters were perfectly drawn. Every one was just as seemingly likable and obviously suspect as the next. And that plot! Just when I thought things couldn’t get any worse, they did. Again and again and again.

I really wish I could say more but this book is best read knowing nothing beyond the synopsis. After reading it, I’m motivated to read Carpenter’s The Weight of Lies. I would certainly read any of her forthcoming work.

Many thanks to Lake Union for providing me with a free copy of this book in exchange for an honest review.