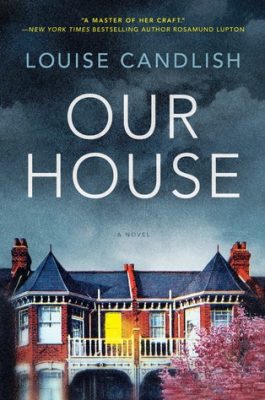 Our House by Louise Candlish
Published by Berkley on August 7th 2018
Pages: 416
Goodreads

On a bright January morning in the London suburbs, a family moves into the house they’ve just bought in Trinity Avenue.

Nothing strange about that. Except it is your house. And you didn’t sell it.

When Fiona Lawson comes home to find strangers moving into her house, she's sure there's been a mistake. She and her estranged husband, Bram, have a modern co-parenting arrangement: bird's nest custody, where each parent spends a few nights a week with their two sons at the prized family home to maintain stability for their children. But the system built to protect their family ends up putting them in terrible jeopardy. In a domino effect of crimes and misdemeanors, the nest comes tumbling down.

Now Bram has disappeared and so have Fiona's children. As events spiral well beyond her control, Fiona will discover just how many lies her husband was weaving and how little they truly knew each other. But Bram's not the only one with things to hide, and some secrets are best kept to oneself, safe as houses.

If you’ve been monitoring my tweets (and why wouldn’t you be?) you’ve seen that I started fangirling over Our House the moment I started it. I don’t really do the fangirl gushing thing very well or very often but I’ve found some difficulty in restraining myself with this book. I will do my best to maintain some level of coherency in an effort to convey to you, as best I can, why I loved it.

The first thing that stood out is that we hear most of Fi’s side of the story via a crime podcast she has done called The Victim. It gave the whole book a bit of a modern epistolary-twisty feel.

“Of course, once you hear my story you’ll think I have no one to blame but myself—just like the audience will. I know how it works. They’ll all be on Twitter saying how clueless I am. And I get it. I listened to the whole of season one and I did exactly that myself. There’s a thin line between being a victim and an idiot.”

As far as the plot goes, it was absolutely engrossing. I almost choked when I read a comment from the police: “This could have happened to anyone, Mrs. Lawson.” I thought yeah, right, almost anyone could come home to find all of their belongings moved out and a new family moving in. But I’ll be damned. It really could happen. Learning how it could happen was fascinating. But it didn’t stop there. In fact, that was only the beginning.

I don’t often love a book if I’m not particularly attached to any of the characters but Our House was an exception. Perhaps because they were simply so convincing. Louise Candlish did an excellent job of balancing them out. There were moments I hated myself, realizing I was starting to feel sympathy for the wrong ones…

Right up until the ending, I was of the opinion that this was a page-turning, solid 4-4.5 star read. The ending made it a no-brainer 5 star read. I did not see it coming. At all. I can’t recall the last time I was so taken aback at the very last second.

When I read the blurb for Our House I was intrigued but wasn’t sure what to expect. It turned out to be a far smarter, more sophisticated read than I ever expected. This is the first book  I’ve read by Louise Candlish but it certainly won’t be the last.

Do visit the Our House website where you can hear a bit of Fi’s podcast. It convinced me that this would be an excellent audiobook as well.

Many thanks to Berkley Publishers for providing me with a free copy of this book in exchange for an honest review.