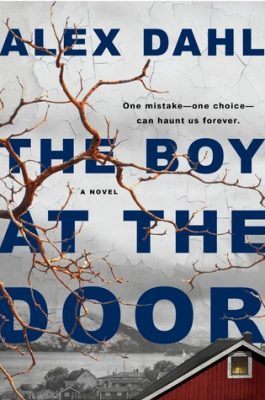 The Boy at the Door by Alex Dahl
Published by Berkley on July 24th 2018
Pages: 368
Goodreads

This riveting psychological suspense debut by Alex Dahl asks the question, "how far would you go to hold on to what you have?"

Cecilia Wilborg has it all--a loving husband, two beautiful daughters, and a gorgeous home in an affluent Norwegian suburb. And she works hard to keep it all together. Too hard...

There is no room for mistakes in her life. Even taking home a little boy whose parents forgot to pick him up at the pool can put a crimp in Cecilia's carefully planned schedule. Especially when she arrives at the address she was givenand finds an empty, abandoned house...

There's nothing for Cecilia to do but to take the boy home with her, never realizing that soon his quiet presence and knowing eyes will trigger unwelcome memories from her past--and unravel her meticulously crafted life...

Welcome to my stop on the blog tour for The Boy at the Door. If your summer reading list is lacking something suspenseful and disturbing, (c’mon they can’t all be light and fluffy) I highly recommend adding this book to your TBR.

If Bravo were casting for The Real Housewives of Sandefjord, they would most definitely want to contract with Cecelia Wilborg. Socialite, designer, day-drinking pill-popper… Cecelia wears a lot of hats. She’s driven to achieve perfection in all aspects of her life and that’s a lot of pressure. She’s understandably annoyed when charged with the task of bringing home a young boy left behind at the club pool. Seriously, she’s a busy woman and those Missoni blankets are not going to buy themselves.

Things go from bad to worse quickly when she discovers an abandoned house at the address she’s been given. Faced with making a difficult decision in terms of how to handle the situation Cecelia, well, let’s just say she doesn’t do exactly as I would have done. And so begins an epic tale of lies, secrets, and more lies to cover up the secrets.

The strength of this book, which is both plot and character driven, lies overwhelmingly in the awesomely rendered character that is Cecelia. She is an absolutely convincing dichotomy of a woman. She is both a “love to hate” and “I can can truly empathize with that” sort of woman. Careful attention was paid to the development of each character. Fear of preventing you from going in with an open mind prevents me from making specific comments on the other characters.

The Boy at the Door provides the trifecta of suspense; it’s a page-turner with an unreliable narrator and an original plot. Solid by any standards, it’s especially impressive as a debut. Though I’ve struggled with Nordic noir in the past, I’ve found this to be a fresh offering; a leaning toward domestic suspense that still offers some traditional crime and procedural elements. I will definitely look forward to Alex Dahl’s next novel.

In closing, I will leave you with what I now think of as  “Johan’s theme”:

Many thanks to Berkley for providing me a free copy of this book in exchange for an honest review.