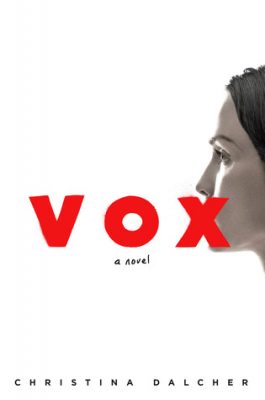 Set in an America where half the population has been silenced, VOX is the harrowing, unforgettable story of what one woman will do to protect herself and her daughter.

On the day the government decrees that women are no longer allowed more than 100 words daily, Dr. Jean McClellan is in denial--this can't happen here. Not in America. Not to her.

This is just the beginning.

Soon women can no longer hold jobs. Girls are no longer taught to read or write. Females no longer have a voice. Before, the average person spoke sixteen thousand words a day, but now women only have one hundred to make themselves heard.

But this is not the end.

For herself, her daughter, and every woman silenced, Jean will reclaim her voice.

Welcome to my stop on the blog tour for Vox, one of the most hyped and anticipated books of 2018. I was absolutely thrilled to be asked to join this blog tour and I’m equally excited to share my thoughts with you!

“Monsters aren’t born, ever. They’re made, piece by piece and limb by limb, artificial creations of madmen who, like the misguided Frankenstein, always think they know better.”

If you’ve alread heard about this book, I’m sure you’ve seen it compared to The Handmaid’s Tale. It’s been almost 30 years since I’ve read that one so I can’t make a fair apples to apples comparison. I generally avoid comparing one book to another but I have say that I think this one may be even more terrifying. I can’t speak for the author’s intentions but it’s doing a lot of things — ruffling feathers, stirring pots, giving wake-up calls — and it’s my hope that she is pleased with the number and level of conversations that are happening as a result her bringing this book into the world.

I’m not going to talk very much about the plot because I want you to go in like I did, knowing only what’s in blurb. If you’re like me, you’ll be drawn in immediately and unable to put it down. It can definitely be devoured in one day. (Perhaps even one sitting if one does not have children home. When is that bus coming??) Christina Dalcher‘s writing is fluid, smart, and thoughtful. The nurse in me loved the medical, linguistic, and scientific aspects of Vox.

Vox is a book with lots of genre overlap. I would put it in the all of the following categories: literary fiction, dystopian, women’s fiction, political fiction, and even a bit of thriller and sci-fi. It’s definitely suited to a wide range of readers. I do think it would make for an excellent book club selection but, depending on the company, I might need lots of wine to get through it. It’s not a discussion to be had in one hundred words or less, let’s just say that. In the spirit of avoiding spoilers (and hey, I don’t want to loose any followers either) I will refrain from interjecting my own opinions here but… I hope readers will consider how they react to this book emotionally today vs. how they may have felt five years ago.

Vox is an impressive, provocative debut and I’m already on the edge my seat in anticipation of Christina Dalcher’s future work.

Many thanks to Berkley for providing me with a free copy of this book in exchange for an honest review.

Like Loading...
« Blog Tour and Giveaway: The Trailing Spouse by Jo Furniss
Blog Tour and Review: Another Woman’s Husband by Gill Paul »